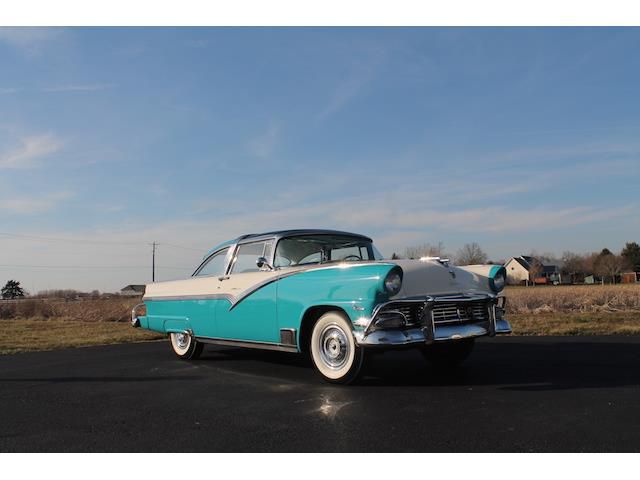 I'm proud to offer for sale this concourse quality 1956 Ford Crown Victoria glass top. Finished in Peacock Blue and Colonial White this immaculate Crown Victoria has been extremely well cared for throughout.

This automobile is kept in a climate controlled garage and driven sparingly. With only 2387 miles since the complete frame off nut and bolt restoration this car is brand new in every respect. The original #'s matching Thunderbird 312 CU-IN 4 bbl V8 was rebuilt and purrs when you start it and runs smooth and quiet.

The original fordomatic transmission shifts easy and without effort. This car has the following options, steering, brakes and 4 way adjust power bench seat. The original Am radio works and the white and dark peacock interior is without marks, scuffs, dirt or damage. The transparent top is in perfect condition and has the zipper liner to keep the sun out. The Continental kit works with ease and has a real spare behind as well as another spare in the trunk. There is not a scratch or blemish on this car.