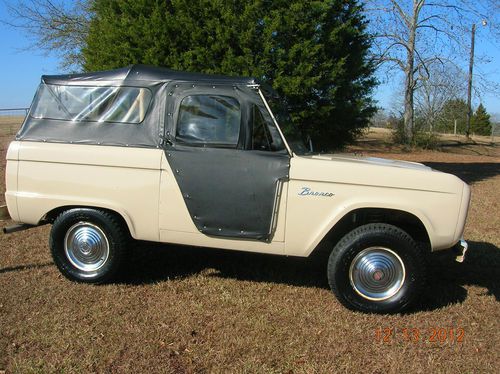 To the best of my knowledge, the Bronco has never been wrecked.  I've certainly never wrecked it and I was told when I bought it, that it had never even been in a fender bender.  The gas tank leaks when full.
New high-quality, custom-made seat covers (front buckets and rear bench) to match the original factory spec vinyl, including gray color (only color available on the '66 models) and texture, installed in 2000.  Not sure if the paint is original (it's not been painted since I've had it) but is in very good condition.  Small, slight bubble rust under paint in one place on front right quarter panel, near bumper.  Slight surface rust on original floor pans; slight surface rust on the original bumpers.  When I say "surface", I mean surface.
Just had all fluids changed, new tires (235/75R15 Goodyear radials), new battery, new brakes, rebuilt master cylinder, new right front brake cylinder, new front axle seals.  My mechanic could not find a new distributor cap or rotor button, so it "bucks" a little on take off.
Less than 5,000 Roadsters were produced by Ford.  How many are still around?  And how many are still around in this condition...uncut, unmolested, and un-restored?  My guess is less than five.
Features:
The successful bidder must make a $250 deposit via PayPal within 48 hours of the close of the auction.  Full payment for the vehicle must be made within seven days of the close of the auction.  The vehicle will not be released until payment is received via bank transfer or other means acceptable to the owner.  Sale does not include shipping.  Buyer is responsible for all shipping arrangements and costs.
I have tried to provide an honest description of this Bronco.  I encourage anyone interested in bidding to view the Bronco in person, it is located in Pine Mountain, GA.  If you have any questions, please let me know prior to bidding.
This Bronco is sold as-is, where-is, with no warranty implied or given.
On Jan-28-13 at 17:47:51 PST, seller added the following information:

To answer a question I received...this Bronco came from the factory without "hard" doors and top.  It came with canvas doors (mounted on metal rod frames) and canvas top.  There are no door hinges, just holes to receive the metal rod frames at the bottom.  The current door frames are original; the canvas doors and canvas top are replacements the original owner did in the 1980's.

I've posted a picture from a few years ago showing the Bronco with the doors off and the top rolled up in the back and on the sided.  I have a picture somewhere of the top completely off but cannot find it right now; if I find it, I'll post it.