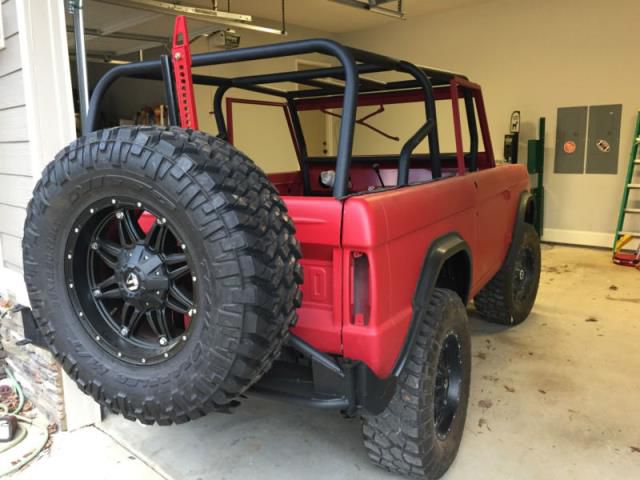 It is a frame off 69 Ford Bronco fresh out of paint and LIne-X Booth. It has a fresh 302 yet to be cranked. Every nut, bolt and piece of metal replaced on this truck except hood, Hard top,Front Grill and rear lift gate are new. If you are looking for an all original Bronco this is not your truck but if you are looking for a bad ass bronco that has been modified and restored from frame up then this is your truck. Delphi Power Steering ConversionNV 3550 Transmission swap/New shifter handle2-1/2" Wild Horses Suspension lift1" Body LiftDana 44 and Dana 20, and 9" Ford rear end completely rebuiltFront Disc Brake ConversionCompletely Restored Bronco Frame assemblyNew warn lockout hubsBlack Bronco Script Valve CoversFresh Engine paintNew sending units in both Tanks23 Gallon rear tank brand newBrand new black powder coated steering column IdditBrand new Centech Wiring harness ready for installUltra Flow HeadersJames Duff rear bumper with Tire Carrier powder coated blackJames Duff Front plate bumper powder coated black42" Hi-lift jack18" Fuel Wheels (5?D44 HD Axle Set w/jointsAll new brakes on rear, u-joints, Drive shafts, and on and on and onFamily Roll Cage powered coated flat blackFlat Black Hard top is at body shop and is included as well as Front Grill. (Last two pieces to come from paint shop)Brand New Steering WheelStainless Steel bolt kit