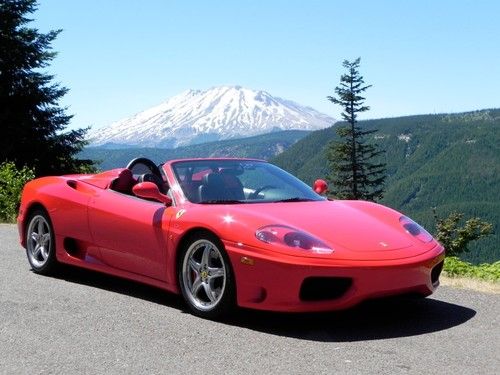 High-zoot supercar tour organizer Gran Turismo Events held its annual Nürburgring track day last month, and in addition to the amateur punters the gates were opened to two tuned supercars from Edo Competition: A Maserati MC12 Corsa and a Ferrari Enzo ZXX. The ZXX, in case you've forgotten, is the same love child of Edo Competition and Zahir Rana's ZR Exotics that belly flopped into the Atlantic during the 2011 Targa Newfoundland.
We get a trip around the Nordschleife with both cars during a no-doubt quick but not insane lap, on board with driver Patrick Simon in the 755-horsepower MC12 and 'Ring queen Sabine Schmitz following in the 840-hp ZXX.
That should be all the build-up you need when the action's in the video below.

Although the vast majority of eyeballs were tuned to the madness at Barrett-Jackson this past weekend, that televised car auction wasn't the only high-dollar game in Arizona. RM Auctions brought its usual gaggle of exotic wares to the desert, and the car that came out on top sold for much more than Barrett-Jackson's highest sale, the Batmobile.
Coming out on top at RM last weekend was Lot 164, a 1960 Ferrari 250 GT SWB Berlinetta 'Competizione' that sold for a massive $8,140,000 - the buyer could've nearly bought two Barris Batmobiles for that chunk of change. Lot 122, a 1967 Shelby 427 'Semi-Competition' Cobra, stood at $2,007,500 in second place, just in front of Lot 145, a 1967 Ferrari 275 GTB/4, which sold for $1,842,500.
After all said and done, RM reported $36.4 million in sales. That's a record for RM in Arizona, even though the total number of lots for 2013 was reduced significantly. Eight machines cracked the million-dollar mark, and you can see all of them in the press release right down below or peruse all of the auction results here. But first, be sure to scroll through our high-res image gallery of live photos above.

While so many supposed Ferrari fanatics are just sitting on their collective hands and waiting for the Italian supercar maker to finally reveal its F150 (or whatever it'll be called) Enzo follow-up, designer Josiah LaColla has gotten busy with his Wacom tablet and set to work. The results, though quite possibly no closer to the actual F150 as any of the other renderings we've seen thus far, are lovely to behold.
Well, actually, "lovely" probably isn't the perfect descriptor - anything less than a little bit brutal wouldn't be a proper successor to the Enzo, nor would it fit the parameters laid out by the test mules we've seen so far. Accurate within the best of LaColla's ability to guess and imagine is probably a better way of looking at these designs, which show a car that has enough venting to keep the bowls of Hell cool (should Hell ever hit the autostrada at 150+ miles per hour).
We've recapitulated the designer's own words in press release form, below, so as to give you a good idea of his intentions with the design. Read, view and tell us what you think the renderings, in comments.