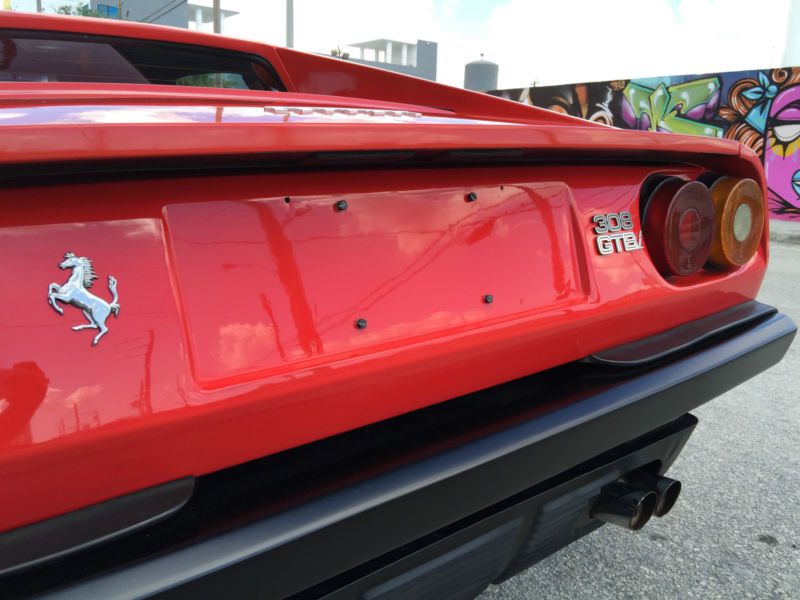 Send me an email at: donyadrrank@boyracer.net .

1981 FERRARI 308 GTBi
"Gran Turismo Berlinetta"
METICULOUSLY SERVICED, MAINTAINED & DOCUMENTED...
ALL BOOKS, MANUALS, RECORDS, & TOOLS...
MAJOR SERVICE COMPLETED RECENTLY BY FERRARI...
ALL ORIGINAL U.S. SPEC BUMPERS, WHEELS W/TIRES, & MISC PARTS INCLUDED...
A VERY NICE DRIVER & INVESTMENT WHILE YOU ENJOY IT!!!
RUNS & DRIVES GREAT & WILL ONLY CONTINUE TO APPRECIATE IN VALUE OVER TIME!!!
MAJOR SERVICE PERFORMED!!!
All Records and Receipts Included.
GUARANTEED ALL ORIGINAL PANELS, & RUST FREE!!!
1 of Only 494 GTBi's Produced...
$115K OBO
In 1980 Bosch K-Jetronic mechanical fuel injection was added on the 308 GTBi and GTSi. The Bosch fuel injection
system was coupled to a Marelli MED 803A Digiplex electronic ignition system, incorporating a coil, distributor and
ignition module for each bank of cylinders.
Outside the car was identical to the 308 GTB/GTS, save for metric sized wheels of a slightly different design,
fitted with Michelin TRX radial tyres—Michelin XWX on 16-inch wheels were optional.
Inside the clock and oil temperature gauge were moved to the centre console; there were also a new black steering
wheel with three perforated spokes, and seats of a different pattern.
494 GTBi's and 1743 GTSi's were produced before the model was succeeded by the 308 Quattrovalvole in 1982.
WE SHIP WORLDWIDE...
ASI INTERNATIONAL FOR QUOTES...

Chris Harris one of the most beloved of British automotive journalists, and yet Ferrari doesn't seem inclined to take him off its black list. Something about having shined the light on the way Maranello sets up its cars for press evaluations, years ago... So the only time the auto scribe and video host we know as Monkey gets his hands on a Prancing Horse-emblazoned steering wheel is when a private owner offers Harris a drive. Fortunately, that seems to happen all the time, but rarely in such a fashion as it has for this latest video.
Here the owner of not only an F40 but also its successor the F50 has lent Harris both of his anniversary-edition Ferrari supercars and insisted that he drive them aggressively. So off they went to the Anglesey circuit in Wales to see how these precursors to the Enzo and LaFerrari fare alongside one another decades after they first hit the road.