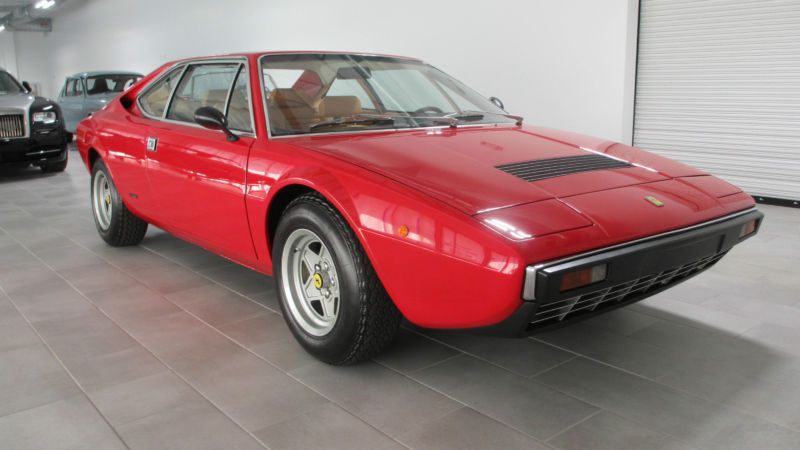 HERE IS A RARE OPPORTUNITY TO OWN ONE OF THE FINEST EXAMPLES OF THE INFAMOUS FERRARI DINO 308 GT4!!! THIS IS A 1977
EUROPEAN SPEC SERIES II CAR, PARTIALLY RESTORED
THIS VEHICLE WAS ORIGINALLY IMPORTED TO THE U.S. AS A EURO SPEC MODEL BY ROBERT CRESSMAN, FORMER OWNER OF CRESSMAN
FOREIGN CARS/ SHELTON FERRARI, NOW FERRARI OF FORT LAUDERDALE. (VEHICLE WAS NEVER A U.S SPEC CAR)
YOU COULDN'T RESTORE ANOTHER 308 TO THE LEVEL OF THIS VEHICLE FOR THE PRICE!!$$
ALL OF THE RECENT WORK ON THIS VEHICLE WAS PERFORMED BY THE CRAFTSMAN AT THE RENOWNED AND AWARD WINING STRICTLY
FERRARI FACILITIES IN NAPLES FLORIDA. CONSIDERED TO BE ONE THE LARGEST RESTORERS OF 308 DINOS IN THE WORLD.
-THE ENGINES TOP HALF HAS BEEN REBUILD WITH ALL NEW VALVES, VALVE GUIDES, AND VALVE SPRINGS (NO MORE SODIUM
VALVES).
-CARBURETORS AND IGNITION SYSTEM (SINGLE DISTRIBUTOR) HAVE BEEN COMPLETELY REBUILD.
-COMPLETE ALL NEW COOLING SYSTEM, BRAKE.
-STEERING AND SUSPENSION ASSEMBLIES HAVE ALSO BEEN COMPLETELY RESTORED TO FACTORY ORIGINAL SPECS.
-BODY AND CHASSIS ARE COMPLETELY STRAIGHT AND DAMAGE FREE.
-BODY IS FLAWLESSLY RE-PAINTED. (3 months ago)
-ALL CHROME TRIM AND BUMPERS WERE RESTORED AND ARE FLAWLESS.
-ALL NEW RUBBER MOLDINGS AND TRIM.
-INTERIOR WAS RESTORED AND DYED TO ORIGINALITY.
-FACTORY ORIGINAL TRUNK CARPET (RARE).

This is what you get as your first car after you've just passed your driver's test at the age of 25: a 1965 Ferrari 330GT 2+2 Coupe. Of course, that's assuming your name also happens to be John Lennon and you've just helped record Ticket to Ride with the rest of your Beatles cronies.
When news of Lennon getting a driver's license made the newspapers in England, luxury car makers parked outside his mansion with offerings and this is the one he chose, painted Azzuro Blue with a blue interior. He paid 6,500 pounds, said to be equivalent to 110,000 pounds today ($170K US).
Bonhams will be auctioning the blue Italian at this year's Goodwood Festival of Speed on July 12. It was just one of 500 built, has been restored to its original condition, has matching numbers and its original license plate number. The pre-auction estimate is between 180,000 and 220,000 pounds ($278K - $340K US).

Ferrari production to increase under Marchionne

The head of any company has to juggle the relationship between supply and demand. Of course, that applies to automakers too, even ones as high-end as Ferrari. And as with many other decisions, the way Ferrari has addressed supply and demand has come down principally to the principal.
Enzo Ferrari may have only wanted to sell as many vehicles as he needed in order to fund his company's racing department, but with the F40 - the last model made under his watch - Ferrari ended up increasing supply to meet growing demand. However, after Luca di Montezemolo took over in the wake of Enzo's passing, he started constricting supply. He figured Ferrari could sell 400 units of the F50, for example, so he built 399. More recently, Montezemolo undertook a course of action that spread Ferrari into more markets, while simultaneously constricting supply to increase demand and thereby profitability.
It's been a winning formula for Ferrari. Just days ago, the company announced record earnings up by 14.5 percent in the first half of 2014 over the same period last year, which itself had seen a 7.1-percent increase over the year before. Clearly the strategy has worked, but Montezemolo's successor is already eying a different approach.