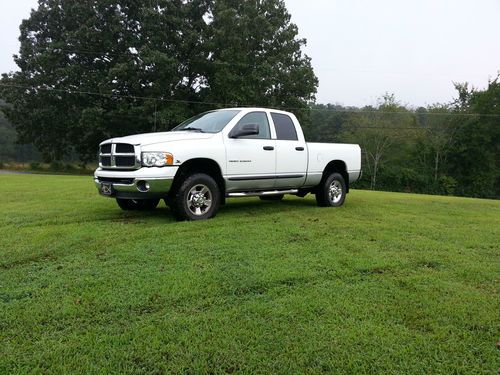 Condition: UsedA vehicle is considered used if it has been registered and issued a title. Used vehicles have had at least one previous owner. The condition of the exterior, interior and engine can vary depending on the vehicle's history. See the seller's listing for full details and description of any imperfections.Seller Notes:"In excellent condition. No dents, dings, tears, rips, etc. May have a chip or small scratch that is unnoticeable."

I have for sale a 2005 Dodge Ram 2500.  It has the Cummins Diesel Engine and automatic transmission.  It is 4wd.  It is an SLT with leather, power driver seat, power window, locks, cd player, cruise, etc.  It has a new set of nitto terra grappler tires.  It also has a B&W gooseneck hitch.  It has an Airdog fuel system with upgraded filtration.  Its never had a chip or programmer on it.  The truck is very clean, inside and out.  The body is clean with no dents or dings.  The interior is like new with no rips or tears.  Its never been smoked in.  My brother in law bought this truck new.  Email with any questions.