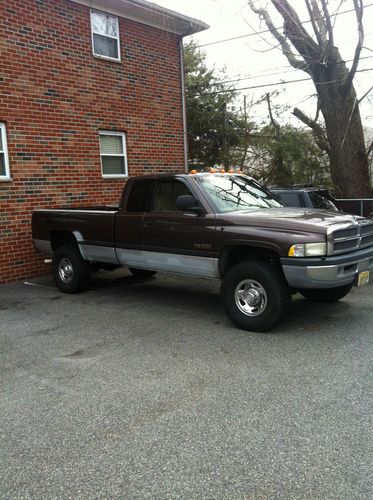 This truck has power everything and in decent shape it does need to have some body work done due to the famous dodge ram door and rocker rust the body is by no means perfect it has dings and dents but over all very solid truck. The passenger side door has already been repaired by me and new steel has been welded in it needs drivers door bottom and drivers front rocker repaired see pics truck also needs new rear bumper.
Engine has 143xxx miles and is the 12 valve cummins diesel never modified and runs great
Transmission shift properly and has never had a problem
Interior is tan leather and in great shape this is a quad cab so both rear doors do open
Has 8ft bed and tow hitch
4X4 works fine
Has New front and Rear shocks
Has 35" cooper tires
I bought the front leveling hit for the coil springs so the 35"s dont rub but never installed
I always changed the oil every 5000 miles with rotella T 15-40
Any questions just ask
Thanks and Happy Bidding
Truck also has brand new 4" turbo back exhaust less than 1 month old