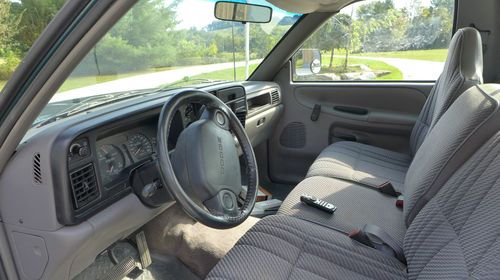 Condition: UsedA vehicle is considered used if it has been registered and issued a title. Used vehicles have had at least one previous owner. The condition of the exterior, interior and engine can vary depending on the vehicle's history. See the seller's listing for full details and description of any imperfections.Seller Notes:"5.9L SFI OHV Truck with 3 passenger seating, 2 wheel drive-rear,gasoline with bedliner and rear tool box. A/C, Kenwood am/fm stereo radio with remote control and cd player, cloth seats. Seats are worn and need cover, dash crack, mirrors and rear bumper need adjustment. Installed new tires with 3000 miles. Great work or farm truck. Air conditioner works well. Recently tuned up."

Rear bumper bent down and needs to be adjusted. A/C works great.  Truck has a bit of age on it but runs great and am not aware of any mechanical problems.  Current owner for past 3 years. Smoke free environment.

Carfax report indicated minor slight damage in 2009 prior to purchase.
Truck is located in Lynchburg, Tennessee and could arrange for local pickup only.
Title is clear and no lien holders.
Cash, cashier's check, paypal only.  Full payment expected within seven days of transaction completion.