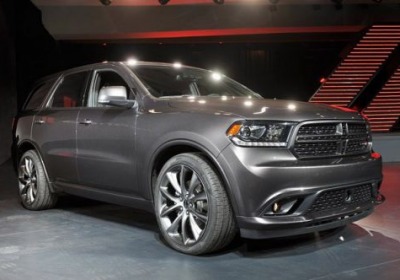 With all the new updates the Dodge Durango is getting for 2014, one thing that Dodge isn't changing on its big SUV is the starting price. Just like the current model year, the 2014 Dodge Durango will be priced from $29,795 (*not including $995 for destination).

The many improvements made to the 2014 Durango include revised exterior styling, added in-cabin tech and an eight-speed automatic transmission (expected to return better fuel economy). Dodge is saying that the V6 models will get 25 miles per gallon on the highway while V8 models are expected to score 23-mpg highway, but there are no official EPA numbers to report yet. Scroll down for the full press release.

The new 2014 Dodge Durango competes in the fastest growing segments in the U.S. auto industry, the full-size SUV and crossover segments, which combined are up nearly 50 percent since 2009. No other vehicle in those segments can match the Durango's long-list of standard features and utility, including best-in-class power (up to 360 horsepower and 390 lb.-ft. of torque) best-in-class towing of up to 7,400 lbs. and best-in-class driving range of 600 miles on a tank of fuel.

"Dodge Durango is on a tremendous run, with 9 months of consecutive growth," said Tim Kuniskis, President and CEO -- Dodge Brand. "The new 2014 Durango builds on that momentum, raising the bar for performance, technology and style. With best-in-class power, towing, infotainment and fuel economy; the new Durango offers a combination unmatched by any other SUV or Crossover in America."The 2014 Dodge Durango is available in five trim levels: SXT, Rallye, Limited, R/T and Citadel, all packaged to meet the needs of individual customers."

SXT
All 2014 Dodge Durango SXT and Limited models feature the award-winning Pentastar 3.6-liter V-6 engine with 290 horsepower and 260 lb.-ft. of torque as the standard engine. With a standard dual exhaust, the 3.6-liter delivers an impressive 295 hp on Rallye and Citadel models. The 3.6-liter is mated to a new class-exclusive standard eight-speed automatic transmission equipped with a class-exclusive rotary shifter and standard paddle shifters on the steering wheel and can tow up to 6,200 pounds. The 3.6-liter V-6 engine is also capable of delivering up to 25 miles per gallon on the highway giving Durango class-leading driving range of over 600 miles per tank.

The SXT retains its crown as the best-equipped SUV given its tremendous level of standard equipment. Every SXT features premium amenities inside and out, including bright accents on the exterior and premium soft-touch surfaces on the interior.

The 2014 Dodge Durango SXT with the Rallye package has a starting U.S. MSRP of $32,990 (excluding destination).

Newly available for 2014 on Limited, R/T and Citadel models is a Blu-ray rear-seat entertainment system. This dual-screen system, mounted in the front seatbacks, can play traditional DVD and Blu-ray discs and has individual High Definition Media Interface (HDMI) and RCA inputs to accommodate high-definition gaming systems.

R/T
The high-performance version of the all-new Durango comes standard with body-color hot-rod looks, HEMI® power, world-class handling and true R/T heritage. The 5.7-liter HEMI V-8 engine produces a best-in-class 360 horsepower and 390 lb.-ft. of torque with a best-in-class tow rating of 7,400 pounds. The 5.7-liter engine's Fuel Saver Technology with cylinder-deactivation seamlessly alternates between smooth, high-fuel-economy four-cylinder mode when less power is needed and V-8 mode when more power is in demand to deliver an impressive combination of power, capability and fuel efficiency of up to 23 mpg hwy.

Other standard features on the R/T (building off the content of the Limited), include: dual exhaust, body-color grille with black "Per-Form" texture, black HID headlamp bezels with LED daytime running lamps, body-color front and rear lower fascias, wheel flares and sill moldings. On the inside, R/T features a standard Capri leather interior in black with red accent stitching and R/T embroidery.

Citadel
Citadel is the ultimate in Durango luxury. Citadel customers want premium content with a performance bias, and realize Citadel gets them there at an attainable price in a style that stands apart from the crowd.

About Dodge
For nearly 100 years, Dodge has defined passionate and innovative vehicles that stand apart in performance and in style. Building upon its rich heritage of muscle cars, racing technology and ingenious engineering, Dodge offers a full-line of cars, crossovers, minivans and SUVs built for top performance – from power off the line and handling in the corners, to high-quality vehicles that deliver unmatched versatility and excellent fuel efficiency. Only Dodge offers such innovative functionality combined with class-leading performance, exceptional value and distinctive design. With the all-new 2013 Dodge Dart that achieves up to 41 miles per gallon, the all-new Dodge Charger paired with the ZF eight-speed transmission that achieves a class-leading 31 miles per gallon on the highway, the new 2014 Durango and the significantly revamped Grand Caravan – inventor of the minivan – Journey, Avenger and iconic Challenger, Dodge now has one of the youngest dealer showrooms in the United States.