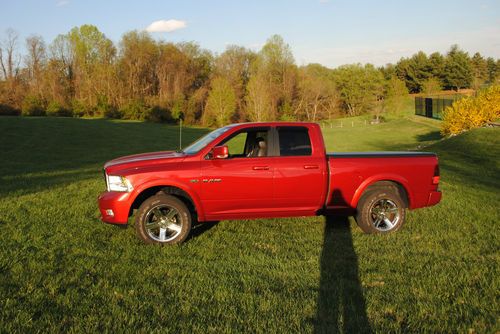 This 2009 Dodge Ram 1500 sport loaded is so beautiful !!!!!!!!!!!!!!!   I want to keep it forever but I have kids and more on the way.  It has everything like the navigation and the beautiful 20's with awesome looking chrome wheels.  Everywhere I go people comment on how nice my truck is.  I added the the undercover lid that locks and has lights in it.  The truck looks awesome and shines like a showroom truck.  It has never been wrecked and garage kept.  The tires are original and will need to be replaced eventually.  I can say these are the original tires so you know the truck has not been abused.  The truck is a head turner !!!!!!   There is a little dmage on the rear bumber from a small trailer coming loose and causing damge.  This truck can tow a house with it's class IV hitch but it has never pulled anything heavy ! I have bearly towed anything with this BEAST !  It has all the options like chrome, gps, sliding rear window.  If you want a little speed look out, that HEMI will show you what's up ! Honelstly I thought I would I would keep this truck for ever because it is so awesome ! I need the money for a new mini van.

This is a great truck that will run forever.  Also I did not mention, it has had mobil 1 all it's life ! My loss is you gain and I want it to go to a great owner ! This truck is for sale locally and I reserve the right to end this auction if it sells.