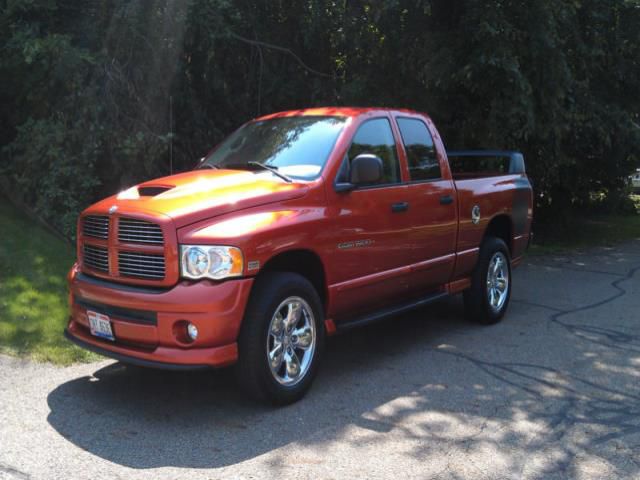 Up for auction is my 2005 Dodge Ram Daytona 4x4 crew cab with 76,900 miles. The Truck has the 5.7 Hemi and is equipped with a automatic transmission. The truck has never been in an accident, and is all original minus the tinted windows. I've owned the truck over the past 3 years, but due to working further away now from home, I am looking to downgrade to something with better gas mileage. The truck will do 17.6 mpg on the highway, and about 14.8 around town. I did remove the bottom valance that is below the fog lights which you will see in some of the pictures due to ground clearance concerns. The tailgate does show some slight surface rust below the paint, as well as the rear bumper. Someone had backed into the bumper at some point, and it is pushed in slightly, which is where some of the surface rust has came through. You can see the area I'm talking about in one of the pictures. The tires are the original tires that were one it when I purchased the truck. I had planned on replacing them late next year. They still have tread and are nowhere near bald, thus why I figured they'd be good for at least another year for me. Also planned on doing the breaks prior to winter. There is no squeal, but like to keep up on things before they get out of hand. If you would like to see the truck prior to bidding, please don't hesitate to contact me to work out a time for you to view the truck. I know if it were me, I'd like to see what I'm bidding on before doing so, and completely understand you wanting to do the same. Also gives you a chance to see if this truck is for you. It does get a lot of looks around town, especially after being detailed. The orange is an amazing color, and honestly my personal favorite of any vehicle color. Payment is due within 3 days of Auction end, and must be either made via certified cashiers check, Cash, or Money Transfer. No personal checks please. I do own the truck outright, and have title in hand. Please feel free to call me at 3 3 zero - seven 0 5- seven one 7 6 if you have any additional questions. Thank you and good luck bidding!