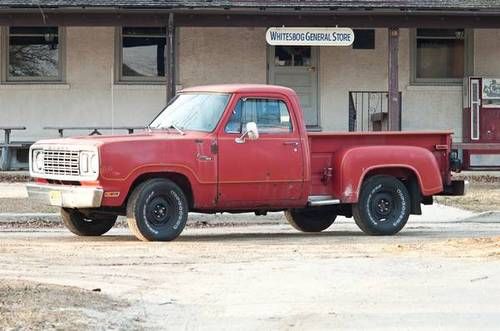 This is a true Warlock optioned truck with a stout 360, 727 trans, 2wd drive train that sat patiently in a garage in PA for 10+years before being rescued. It is an excellent candidate for restoration, or cruise as is.
It has a clean NJ title and I have been using it as a daily for the last 2 weeks. This truck will leave a set of stripes on any road surface you want it to and drives straight as an arrow.
It does have a bit of facial rust but the only things that are rotted are the lower doors, driver rocker, and lower core support. The floors are in amazing condition as well as the bed. The chassis is very solid.  It' shouldn't take long to get the bodywork completed on this truck.  There is 1 dent in the driver front fender the rest of the body and bed is straight as an arrow.  The grill has a small are of damage on the top but is repairable.
The Interior pieces are in great shape but the seats, steering wheel and radio are incorrect for the truck they are the correct style and in good condition though. It is very comfortable and a pleasure to drive.
All of the lights except the Dome work. the radio does not work and the heater valve needs to be replaced. the wiper motor works but the linkage needs to be reattached. The odometer reads 76K but the speedometer cable was removed due to the cable being frozen.
The pinstripes are incorrect but the remains of the correct pinstripes are visible on the doors and fender.
The glass which is factory tinted is in great shape minus 1 small chip in the upper left windshield.
Message me with any questions or to come for test drive.

Auction may end due to local sale.
This is a very very rare truck. With an estimated 500 Red Warlock optioned trucks being produced in 1977,