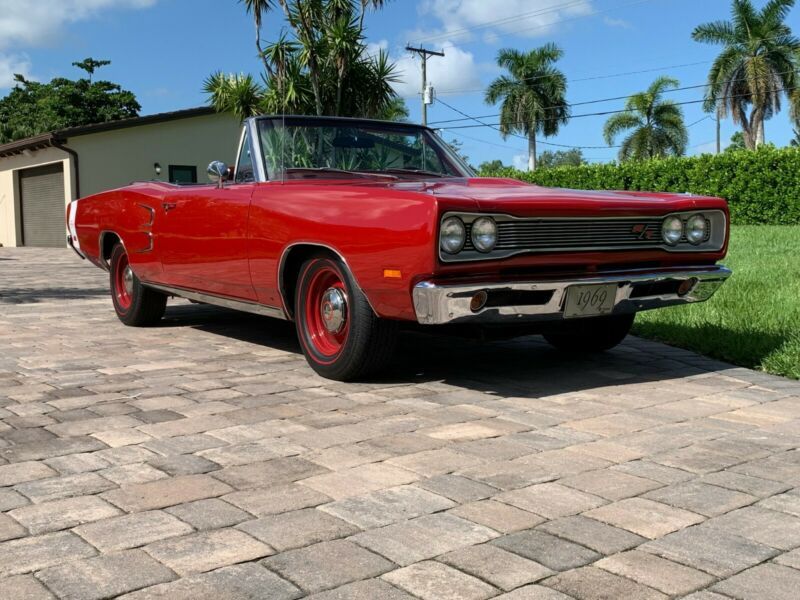 Rare & Ultra Desirable 1969 Dodge Coronet R/T Convertible (zero rust and factory undercoated)
This 1969 Dodge Coronet R/T 2 Door Convertible with R6 RED paint and R6 RED vinyl interior- one of a mere 317
built for that model year. It features a ground-shaking, high-performance, matching-numbers 440/375 HP V-8 engine.
It is further equipped with a power convertible top, power steering, power brakes, automatic transmission,working
cold ac and fender-mounted turn signals, rare factory cruise control (presently disconnected), bench seat with
armrest. An early-production Coronet with unique parts, the equipment group is rounded out with a Sure Grip 355
rear end and heavy-duty suspension.
One of 317 Total Built w/ 440 CI, 375 HP V-8 Engine
This '69 Coronet R/T has its factory colors of r6 red paint with matching original red interior. the paint
combination that certainly looks sharp when contrasted by its white R/T stripe and white convertible top, giving it
a cool presence on the road that is only accentuated by its redline tires. The car looks ready to display at car
shows and has the potential to add a unique dimension to any collection. It needs nothing to be enjoyed immediately
after years of meticulous care and maintenance.