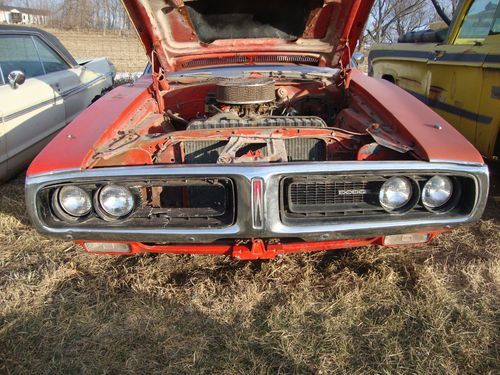 I bought the Yellow Charger because the body is in really nice shape and only has rust on the roof . Some one started to fix up the yellow car by painting the engine bay orange. This car has Power disc brakes with A/C and power steering. No engine or transmission . It is appearant that someone had converted it to a 4 speed so it has the pedals and a nasty hole in the floor for the shifter but other wise the body is very solid.

. The red 500 has had a paint job . It was born light blue, most likely it got wrecked in the early 80's, the original 383 is long gone. The  origin of the 440 is unclear and has been rebuilt . It currenty has a bad starter and hasn't run for a few years. Both cars have Iowa titles .

I had plans on making one good car but my interest have changed. I just want to move them . They should go together and I hope to make a deal with some one who can handle two cars. Check 'em out and make an offer. I would split them up and I  could use the 440 for another project I have if that becomes a bargining chip. I would consider trades of 69 GTX or Super Bee cars or parts. I also have other cars for sale or trade. Located in eastern Iowa along I-80.

I want to make it clear that the auction is for both Dodge Chargers, The winning bid takes both cars and I will the leave the engine in the red car.There is still no engine or trans with the yellow car .Both cars have Iowa titles.