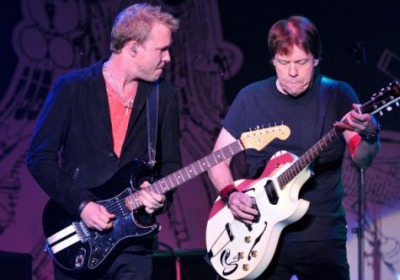 Judging by his collection of cars, blues musician Kenny Wayne Shepherd (shown above, at left, with fellow musician George Thorogood) is an enthusiast of classic Dodge muscle cars, so it's no surprise that he is an active member of Mopar-related online communities. When his 1972 Dodge Charger turned up missing from an LA-area warehouse last Wednesday, Shepherd took to the forums of Moparts.org in an attempt to get the word out in hopes of recovering his custom classic.

The Charger was stolen along with four other vehicles, and Hot Rod reports that two women have been taken into custody since – but still no word on the car. With its blacked-out appearance (including custom Foose wheels), this car is definitely hard to miss, but Shepherd also said that the car might be even more distinguishable now due to some body damage that may have occurred as it was being driven from the warehouse lot. Shepherd's website has a full gallery of images for this '72 Charger, which also has a modern 392-cubic-inch V8 under the hood and a six-speed gearbox pulled from a Viper.

If you're in the LA area and happen to see this car, Shepherd asks that you call the LAPD West Valley Division at 818-374-7611. Here's to hoping this one-of-a-kind Charger turns up unscathed.