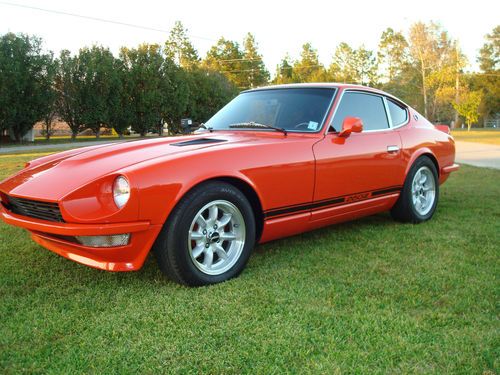 I am selling my 1974 Datsun 260z that has gone through a complete ground up restoration. Everything on the car is new or refurbished. The motor is a rebuilt 280z from japan with a 5 spd trans. The car had very little rust which was cut out and replaced with new metal. It has the 240z bumpers and 240z rear tail lights The interior is all custom with a new dash. This is a beautiful restoration by Awesome Z out of Texas in 2007. The car is never driven in the rain and stays in a garage, but now I am moving and have no place to keep inside. The new odom stoped working at 100 miles and so there is an HOUR meter with 91 hrs on it. THE BUYER is to pay a $500.00 deposit 24-hrs after winning the auction. THE BUYER is responcible for shipping. I have the car for sale locally so I may end auction early.