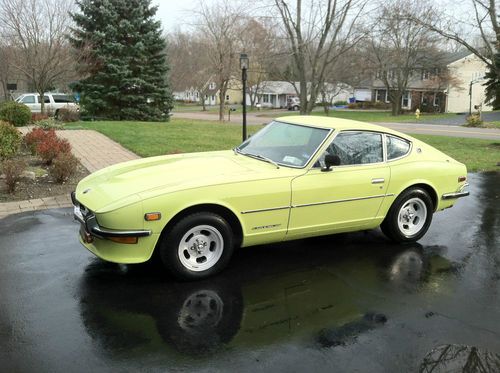 HISTORY
-'72 Datsun 240z
-date of manufacture: 9/71
-second owner, bought in Atlanta 2001.  The original owner passed and I purchased it from his daughter.  The original owner, George, was an airline mechanic with Delta AIrlines.  The front bumper has a small Delta sticker which must stay on the car!
-roughly 2000 miles put on the Z since I purchased it.
-have original sales receipt- in photos
SPECS
-Mostly original minus:
CONDITION
-The Z runs and drives well.  It is not registered or inspected at this time.  I put roughly 100 miles on it this Spring.
-The Z burns a small amount of oil.  The engine has not been touched.  Compression is good and consistent across all cylinders.  I am not talking clouds of black smoke, just puffs under heavy throttle.
-The oil and temperature gauges are finicky. When operable, oil psi is about 45 psi at 2000rpm.
-No fluid leaks, no puddles/ stains on garage floor.
-The Z is equipped with air conditioning as a dealer installed option.  It is not operable, but compressor does engage.
-The original radio works.  I have a replacement power extendable antennae installed.  The switch on the radio to raise/lower the antennae is not sending power to antennae as of this Spring, antennae is operable when powered directly.
-I've replaced the brake master cylinder, both rear wheel cylinders, alternator and voltage regulator over the years.  That's it.
-I've documented the rot as best I can in pictures.  I've bondo'ed in front of both rear tires behind rocker panels.  Both front fenders in front of rocker panels have bondo.  The hatch area is in good shape.  A few bubbled have popped up around fuel fill area.
-The windshield rubber needs replacement.
-The floors are solid.
-The undercarriage is solid.
-The drivetrain is solid, shifts well, no clunks, grinding of any kind.
REASON FOR SELLING
My nights and weekends are consumed coaching youth football, baseball, soccer, and lacrosse.  While I wouldn't have it any other way, I just don't have time to take care of this Z I truly love.  I've owned Z's since high school.  This is far and away my favorite and really really hoped to restore it.  She needs a good home. A little TLC and she's good to go.  Also a great candidate for restoration.  The lime yellow is uncommon and really sharp.  Having the original sales receipt and some hand written maintenance logs from George is pretty special.
Thanks for looking and don't hesitate with questions.