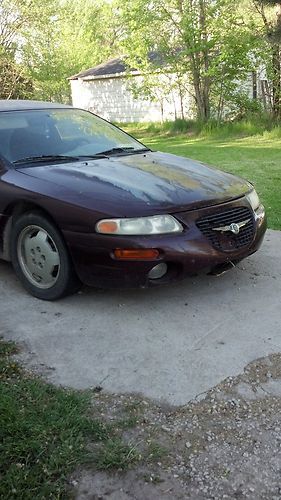 Condition: UsedA vehicle is considered used if it has been registered and issued a title. Used vehicles have had at least one previous owner. The condition of the exterior, interior and engine can vary depending on the vehicle's history. See the seller's listing for full details and description of any imperfections.Seller Notes:"Great running Car 128xxx miles, new batterery, has aftermarket exhaust, car drove like new the only think it needs is a tie rod and cv joint and can drive whereever you desire! The car is currently not driveable untill cv joint and tie rod is fixed, has 3 good tires, just fix and roll down he hwy"

new tire, oil change, transmission flushed, new fuel filter and just a regular check up, could use a new paint job, owned the car for 8 years just to commute to grocery store and work 5 miles away gets good gas mileage just needs a tie rod and cvjoint and will drive and ride like a new car, the reason for sellling is i found a good job and could afford the car i wanted if you have any more questions feel free to contact me, also comes with new rotors and new breaks as well... Payments will need to be through paypal and within 2-3 days, buyer is responsible for pick up, need to be hauled due to cv joint and tie rod