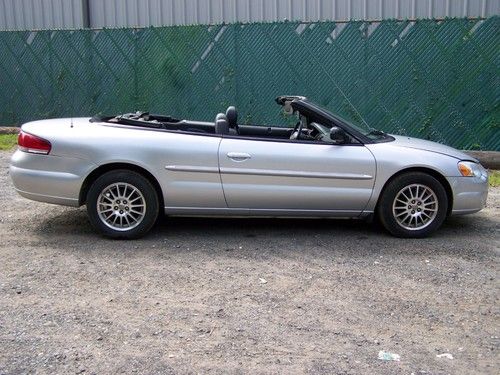 YOU ARE BIDDING ON A 2004 CHRYSLER SEBRING CONVERTABLE IT HAS A 2.7 ENGINE AND AN AUTO TRANS THERE ARE 66,200 MILES ON CAR CAR RUNS AND DRIVES WITH NO KNOWN PROBLEMS THIS CAR WAS PREVIOUS SALVAGE AND NOW HAS A GOOD TITLE WITH A SALVAGE STATUS WE ENCOURAGE YOU TO COME AND INSPECT VEHICLE BEFORE BIDDING OR ASK ANY QUESTIONS YOU HAVE AND WE WILL ANSWER THEM WE RESERVE THE RIGHT TO END AUCTION AT ANY TIME WE ARE A DEALER AND HAVE IT FOR SALE ON OUR LOT OUR PHONE NUMBER IS 732-591-1652 AND OUR ADDRESS IS 456 TEXAS RD MORGANVILLE NJ 07751