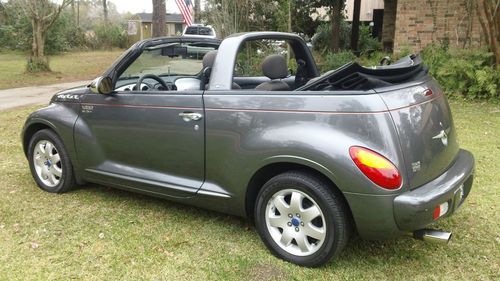 The front-wheel-drive PT Cruiser blends the elements of a sedan, wagon, sport utility vehicle and minivan. Four trims are available: base, Touring, Limited and GT. A new PT Cruiser Convertible went on sale in spring 2004 as a 2005 model.
The PT Cruiser vaguely resembles a panel truck of the 1930s, overlaid with street-rod styling from the 1950s. Bulging fenders; fender-mounted headlights and taillights; and a tall, wide eggcrate grille help give the PT Cruiser its unique look. Another distinctive feature is its basic stance, which makes the wagon look like it's leaning forward. Built on a 103-inch wheelbase, the PT Cruiser is 168.8 inches long overall and 63 inches tall.

A liftgate-mounted spoiler is standard on the GT and optional on the Limited. The potent PT Cruiser GT has a larger, lower grille opening for its air-to-air intercooler. Additional GT features include a large-diameter chrome exhaust tip and all-season performance tires on 17-inch chrome wheels

This vehicle runs strong and needs nothing. It has been well- maintained throughout as one can easily see.