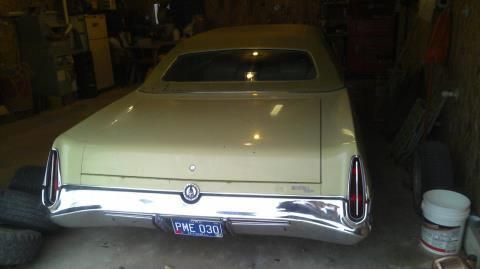 This Imperial is in really good shape the body is 99% rust free there is a coulpe spots on the rear quarters above the fender skirts about the size of a dime, there is a spot of rust in the rear drivers door and some surface rust on on the inside of the doors but nothing all the way through, there is some rust in the truck where the spare sat for years and didnt move still origianal spare.  The interior is over all pretty good the dash has no cracks and the leather is pretty good shape the drivers seat has some tears but other than that the leather is in good shape.  The viynal top has a few rough spots the bottom of the rear window is peeling up and there is a few spots that are rusty but the roof is all soild and I cant feel any soft spots.  The drivetrain is a 440 with a 4 barrel holley it could use a rebuild but it runs, a little rough could use plugs and wires it has a cracked drivers side manifold the motor is hooked up to lp and I have not tried running it on lp but the switches work and there is lp in the tank in the trunk.  The tranny shifts through gears good and moves no problem, it needs some brake work it has a broke rear brake line on the rear end easy fix.  I wish I had the time to fix this car but I just have to many projects, its a overall very solid car and I think it would be a very nice cruiser with a little bit of work.