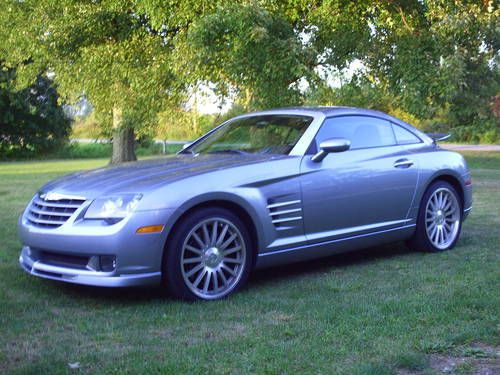 Condition: Used: A vehicle is considered used if it has been registered and issued a title. Used vehicles have had at least one previous owner. The condition of the exterior, interior and engine can vary depending on the vehicle's history. See the seller's listing for full details and description of any imperfections. ...
2005 chrysler crossfire srt6 for sale 21,950 miles ....always garage kept....never seen rain or snow...all original other than it has a needswings dual cold air intake.... car is in near perfect shape.... engine is a 3.2L V6 supercharged around 350 horsepower.... car weighs 3100 pounds so it is pretty light and fast.... top speed is 155 unless you purchase a PCM upgrade to delete speed limiter......car has nitto envo 285/30/19 tires in rear that are new last year and have less than 1,000 miles on them.... stock bose cd player and subs... has navigation....dual heated seats... srt6 stock emblem headrest.... automatic tranny with manual autostick shifter....the only flaws of the car is that it has a few scratches on the hood and the side of the driver seat is showing a little ware from getting in and out of the car....very few crossfire srt6 made with the options this car has....car came with a matching duffel bag with the srt6 badge that i still have....also have original sales sticker which listed new at over $45,000 dollars....Blue Book of car is over $19,000...... i am second owner of car ....contact me for more photos of any part of the car.... I have the right to end this auction at any time because it is for sale locally as well on ebay. no shipping available on this car...local pickup only.... HAPPY BIDDING!