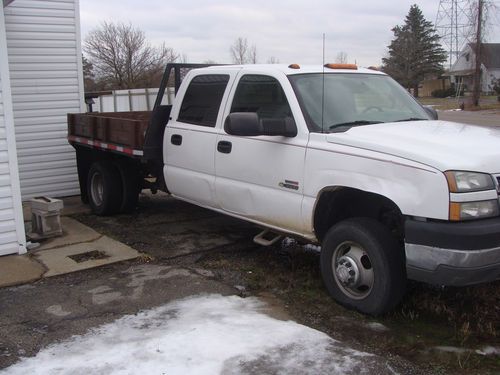 2005 Chevy Silverado crew cab dually 4x4 with duramax 6.6 diesel...Needs work but has great potential. Engine will run poorly, needs fuel injector control module. I have found them on e-bay in the $550 price range.The injectors are starving for fuel and therefore are loud as they are not getting enough fuel to cushion the internal plungers.

The body...I don't believe there is a perfect panel on it.  There is a small dent on the front edge of the hood, there is a small dent on the left front fender, left front door, left rear door and the left cab corner up high. The bottoms of the right side doors are pushed in a bit, but repairable.  The right front fender is banged pretty hard, repairable but I would probably replace it. A good body man could have this truck looking sharp in a day.  The windshield is cracked, but not in the line of vision.
The interior is in good shape with no rips or tears or bad wear marks, just work related dirty.  The steering wheel has been replaced with an older model from a wrecked truck with a blown air bag because someone stole the correct wheel and air bag to get the steering wheel with radio controls in it, i assume.
The GOOD... truck does go straight down the road, 4x4 works, stops great.  Air blows cold, heat blows hot, radio works, power windows, locks and cruise work.  All accessories work. Has a pretty decent solid steel flat bed on it with a recessed gooseneck ball and some sturdy wood sides. It has a class III frame mounted hitch below the bed.
Front two tires are in real good shape and four rear tires are junk. I took this truck in to settle a debt, and I just don't need it as I have two other duallys.  Truck should be towed as starving the injectors for fuel will eventually ruin them and it has no power as it is right now. $500 deposit within 24 hours of end of sale, payment in full within 5 days, paypal ok for deposit, cash or guaranteed funds for balance. Call Mike @ 810-423-8239 with questions. reserve the right to end auction due to being for sale locally.