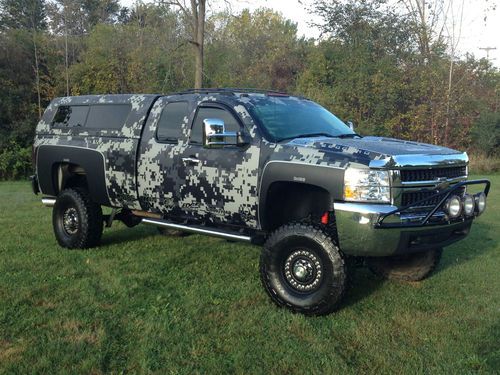 This truck is such an eye catcher lots of comments when driving this. The truck was bought from original owner that drove it to work every day. It was then tore down and built into this beast. All work was done by professionals & done right. This build was worked on over this summer and was just finished up last week. Unfortunately health issue with my buddy's mother is more important than the truck so it was finished so it could be sold. If you have any questions please feel free to ask I am listing this for him so it may take little longer to get any answers but I will do my best.  He does have the truck parked on hwy and listed locally so we may have to remove or pull auction early in the event it sells.

If you notice my feedback is (0) no worries please check my other store catchtheedge I own that store and business also. I just added this store as I am always buying on ebay and selling personal stuff & I needed to separate my personal items and stuff from friends away from bus...
Here is the list if the things that were done:
*new carpet
*K&N air filter
*New battery
*chrome bug shield
*light bar on front w/HD lights
*chrome hood vent covers
*luggage rack on roof
*EDGE programmer
*vent shades
*tinted windows
*7 inch BDS lift
*new rancho shocks all 4
*custom light bar with lights on rear
*original military hummer wheels 18 lug brake down
*Goodyear dura wall run flat tires
*matching spare tire and rim
*full digital camo/carbon fiber wrap
*roof of topper has vintage mural on it
This truck was steam cleaned top to bottom and everything cleaned and checked been to alignment shop everything checks out ready to run the roads trails what ever. I drove the truck last weekend from Lansing Mi to Chicago to a open house at a wrap supply house to show it off. I can tell you it rides great and runs great lots of looks and even had a trooper pull us to the side just cause she had to see it she loved it... I was a pleasure to drive who ever buys this will love it to.