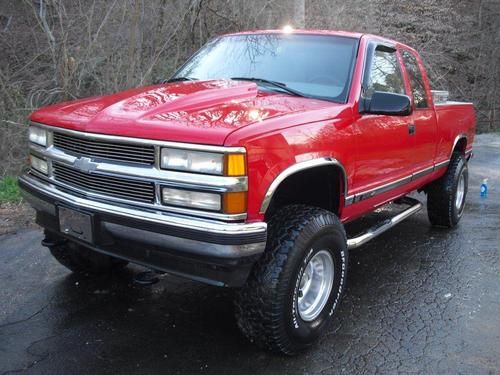 This is an extremely dependable truck. The engine is the factory 5.7/350 Vortec with a performance chip. It gets about 16mpg no matter if you are in the city or on the interstate.The engine is very strong, the transmission shifts perfectly and th 4WD works flawlessly. The truck does not use or leak any fluid. It has never been wrecked. I have owned it since 07 and I saw the carfax when I bought it. It has bucket seats with a console as well as an overhead console. A/C,PW, PL, tilt, cruise, bedliner. It has a factory towing package with a step bumper and a class III hitch.

It has been lifted 7 inches. It has 15 X 10 aluminum Alcoa wheels with 14/35 B F Goodrich All Terrain Radials, chrome nerf bars, treadplate toolbox, one piece all steel cowl hood(no fiberglass junk). I've never had it in the woods but I can tell you it goes very well in the snow.

WHATS WRONG WITH IT...

The a/c needs charged up and it will leak down in 2 to 3 months. My mechanic cant find the leak.---The hood is faded pretty bad---The CD player is locked up. When you turn it on it asks for a 4 digit code which I never set up. The amp and speakers were working fine until the stereo locked up.

This truck needs a few minor odds and ends to be perfect cosmetically but you can hop in it and go anywhere, haul anything or pull anything just like it is and I absolutely assure you it will get you there and back.