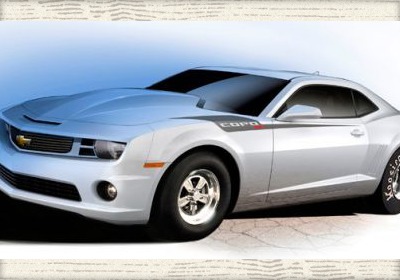 Chevrolet is following up the 2012 COPO Camaro with another limited run of the drag-strip-ready production car for 2013. Ditching the superchargers, the 2013 COPO Camaro can only be equipped with one of three naturally aspirated V8 engines, and other new features include the option of a manual transmission, new front springs, some minor styling changes and a lower starting price of $86,000. All cars are designed to abide by the rules of the NHRA's Stock Eliminator or Super Stock classifications, depending on in which series buyers wish to enter their Chevrolet Camaro.

Returning for 2013 is the 427-cubic-inch V8 producing 425 horsepower, but the new engines include a 325-hp 350-CID V8 and a 375-hp 396-CID V8. Buyers can select to purchase all three engines, and each will be matched with the sequence number of that car; the track-only COPO cars will not have vehicle identification numbers and can't be registered for street use.

Chevrolet is also offering unique enthusiast-specific options such as a COPO Build Book and the opportunity for owners to help assemble their car's engine at the Chevrolet Performance Build Center in Wixom, MI.

Like last year's model and the original COPO Camaro from 1969, only 69 of these cars are being built. If you want the chance at getting your hands on one of these rare Camaros, today is the last day to make your purchase intention known (by visiting chevroletperformance.com) before a third-party company randomly selects available buyers. Those chosen to purchase a COPO Camaro will be contacted on March 11. General Motors says that more than 3,000 people showed interest in the 69 cars built for 2012. More information about the new COPO Camaro is posted in a press release below.

DETROIT – Chevrolet today announced that customers for the limited run of 2013 COPO Camaro factory drag-racing cars will be identified starting Monday, March 11. Only 69 of the cars will be constructed this year.

Racers must make their purchase intentions known by signing up on the COPO Camaro Mailing List at chevroletperformance.com by Thursday, March 7.

"The COPO Camaro program is growing into its second year to support our customers, who have continually expressed their interest for these specialized race cars," said Jim Campbell, General Motors U.S. vice president of Performance Vehicles and Motorsports. "The 2013 production run builds on the success of our inaugural year with new powertrain choices and enhancements that will make the cars even more competitive."

More than 3,000 hand raisers indicated a purchase interest in the 2012 COPO Camaros, when only 69 were built.

COPO stands for Central Office Production Order and was originally used by dealers in the 1960s to generate special orders, mostly for fleet vehicles. Some racing-minded dealers used the system to create higher-performance models that weren't otherwise available, including the legendary 1969 Camaro ZL1, which featured an all-aluminum 427-cubic-inch engine developed for racing. Sixty-nine ZL1s were built and they've since become valuable collector cars.

The 2013 production run will be offered with two all-new engines, as well as a new manual transmission, to make the COPO Camaro eligible for a broader range of NHRA Stock Eliminator classes. The engine range includes three naturally aspirated choices:

A high-feature fuel-injection system is standard on all COPO Camaros, with engine management directed by an all-new Holley HP EFI electronic control unit that features self-tuning fuel table strategies and data logging. The injection system is used in conjunction with a Holley Hi-Ram intake manifold.

Driven by customer demand, the new manual transmission joins the Powerglide automatic for the COPO Camaro's transmission choices. Rear axle gearing is optimized for each vehicle, depending on the engine and transmission.

All of the LS-family engines are built at Chevrolet's Performance Build Center, in Wixom, Mich., and the buyer can opt to participate in the engine assembly, similar to Chevrolet's Corvette Engine Build Experience and the Chevrolet Performance Build Your Own Crate Engine programs. Customers can also select the Engine Collector's Package, which includes all three COPO racing engines serial-number-matched to the car, with one installed at the time of delivery. Serialized engines can also be ordered separately, (i.e. only one additional engine), but will be still number-matched to the car.

Additional new and revised production features for 2013 include:

All COPO Camaros are assembled by hand starting with hardware from the Oshawa assembly plant that manufactures regular-production Camaros. Each is fitted with an NHRA-approved roll cage and other safety equipment, along with racing chassis and suspension components – including a unique solid rear axle system in place of a regular-production Camaro's independent rear axle. Production equipment also includes lightweight Bogart racing wheels and Hoosier racing tires.

The pool of potential customers identified via the COPO Camaro Mailing List is randomized by a third-party organization and a Chevrolet representative will contact them from the Central Office, starting March 11.

The Central Office representative confirms the purchase intent and works with the customer to specify the powertrain, exterior color and graphics and other options. The customer will also indicate a preferred Chevrolet dealership to complete the sale. After that, a COPO purchase certificate is sent to the customer, who will take it to his or her preferred dealer to officially place the order for the car.

Production is scheduled to begin in April, with deliveries starting in early summer. Customers must take delivery of the car in the Detroit area, where the COPO Camaros are built.

Each COPO Camaro features a sequenced build serial number matched to the engine, but is sold without a Vehicle Identification Number and cannot be registered for highway use.

The COPO parts must be ordered and delivered through Chevrolet detailers and other authorized retailers. Additionally, customers can participate in Chevrolet Performance's Build Your Own COPO Engine program when purchasing one of the COPO racing engines (at an extra cost), allowing them to visit Chevy's Performance Build Center to help assemble the engine they purchased.

Also available from Chevrolet Performance is the "COPO Build Book," part number 88958767, which provides an overview of the cars' assembly process for those that want to build their own Chevrolet Stock Eliminator or Super Stock race car.