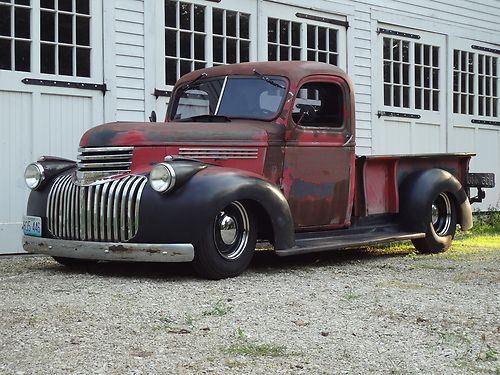 Condition: UsedA vehicle is considered used if it has been registered and issued a title. Used vehicles have had at least one previous owner. The condition of the exterior, interior and engine can vary depending on the vehicle's history. See the seller's listing for full details and description of any imperfections.Seller Notes:"My Grandfathers 1946 Chevrolet 3/4 ton"

Purchased new by C.H. Browne in the fall of 1946 to celebrate his sons return from WW II and to help out on the farm. The Chevy became one of the family as C.H. was hardly without it whether he was working in the fields around Lakin Kansas or going to Garden for supplies. But before long another addition to the family a grandson Chuck.

Grandpa passed in 1963 and the family truck was auctioned off at an estate sale purchased by Don Neff a neighbor it sat for the next 40 years. In 2007 the Neff's called and the truck once again was part of the family....I know the story well I'm the Grandson that rode almost every day in that truck next to my Grandfather. Today the 1946 is built to run at today's highway speeds safely. LT1, 4L60E stock induction, ignition and manifolds. 2.50 SS exhaust. Stock rear with 3.42's  from a Ford Explorer. Fatman front and rear 4 link. 4 wheel disc brakes Stockton steelies and Coker Classic 600R16 front 7.50R16 rear. Stainless fuel tank, frame is boxed and C notched. Power rack and pinion vintage air.
Paint and Bodywork by: GM and Nature. REAL Patina.  Seats stock covered in distressed leather.
One of the coolest hot rods around and built to run.  Read a great article written by Grant Petterson in Classic Trucks April 2008 called Chevy Sabbatical. This has served several times as my daily driver and now it can be yours.....