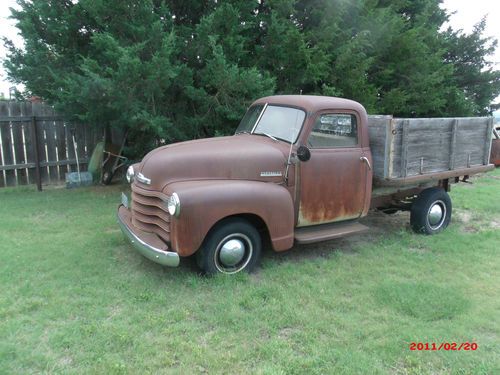 Condition: UsedA vehicle is considered used if it has been registered and issued a title. Used vehicles have had at least one previous owner. The condition of the exterior, interior and engine can vary depending on the vehicle's history. See the seller's listing for full details and description of any imperfections.Seller Notes:"Nice original pickup with strait body 3/4 ton flatbed, runs everything still in tact"

very strait body, 4 spd transmission, 6 cylinder runs, good has small water leak possibly needs a gasket
I am selling this truck for a friend and he has had it running and said it runs very nice but he did notice a small water leak, the transmission works good, the brakes would need some work
some of the glass is cracked, tires are older tires but still hold air, seat need recovered very little rust
This truck would need a general restoration but with as nice as the body is on this truck and being original condition  would be a great looking truck when completed
we have a clear title I can assist in loading this truck on your trailer
These old chevy pickups are getting hard to find  I do not have a reserve price set on this truck so bid to own
I am selling this truck in as described condition the shipping is the sole responsibility of the purchaser
If more information would be needed please give me a call at 785-627-2056 and talk to Dave
Thank You For Looking