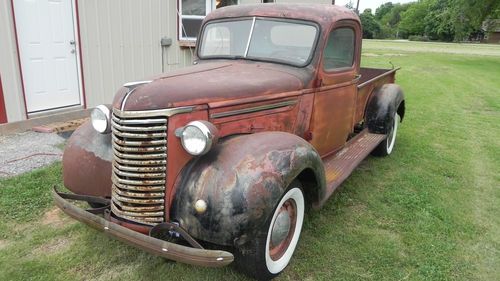 Condition: UsedA vehicle is considered used if it has been registered and issued a title. Used vehicles have had at least one previous owner. The condition of the exterior, interior and engine can vary depending on the vehicle's history. See the seller's listing for full details and description of any imperfections.Seller Notes:"THIS IS A TOTALLY ORIGINAL OLD TRUCK, NEEDING RESTORATION, ALMOST NO RUST, BODY IS VERY STAIGHT."

VERY WELL PRESERVED OLD TRUCK, WILL RUN WITH A NEW BATTERY AND CARB  KIT. HAS VERY GOOD COMPRESION, NEEDS BRAKES WORKED ON, MUST PUMP TO STOP. BODY IS VERY STRAIGHT, ROOF AND BACK OF CAB ARE VERY NICE. ALL DOORS AND WINDOWS WORK. THE WINDSHIELD STILL CRANKS IN AND OUT SMOOTHLY.  NEEDS NEW WIRING. RESTORATION WAS SUPPOSEDLY STARTED ABOUT 20 YEARS AGO WITH AN ENGINE AND BRAKE OVERHAUL. GLASS IS PRETTY GOOD. MOST OF THE ORIGINAL SEAT COVER IS INTACT. NO RUST IN DOOR BOTTOMS, OR FLOOR, CAB CORNERS SOLID.  RUST SPOT ON LOWER CORNER OF DRIVER'S DOOR, OTHERWISE NO RUST. TAIL GATE AND HARDWARE INTACT. TRUCK HAS RARE 15" ARTILLARY WHEELS WITH GOOD RUBBER  THIS TRUCK IS FOR SALE LOCALLY. THE REAR FENDERS ARE  ROUGH, BUT USABLE, FRONTS ARE PRETTY NICE. RUNNING BOARDS ARE VERY NICE AND STRAIGHT. I HAVE THE ORIGINAL OKLAHOMA TITLE (OPEN), WHICH IS IN ORDER AND UP TO DATE. SERIOUS BUYER MAY INQURE AT  SUPERSTOCK1@LIVE.COM   or CALL MARK 580 829 3170  8am-9pm CST.   ALL PAYMENTS MUST CLEAR BANK BEFORE RELEASE. I CAN ARRANGE SHIPPING IF YOU REQUIRE IT