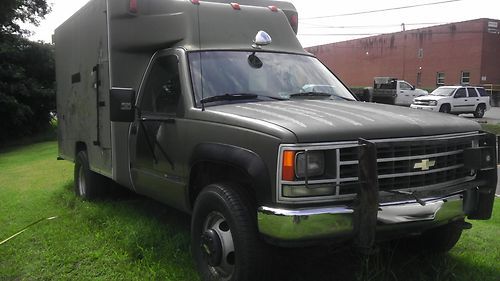 1990 Chevrolet Sierra Pickup Truck with 6 Brand New Tires and 2 Brand New Batteries with a 6.2 Diesel 4x4, it should delivery excellent fuel mileage as it has no pollution apparatis!!!

This vehicle has an automatic 6.2 Diesel 4x4 and runs good.

This was a military ambulance, but can be used for anything of your choice, such as a Camper, Utility Truck, or Hunter Special,

Sold As Is Where Is, No Warranty Provided!!!

This vehicle was bought from the Military and we were going to use it for a service tow truck, but our plans have changed and are now going to sell it.

Terms of the sale are CASH payment, NO PAYPAL and Pickup arrangements will need to be made prior to purchase.

All Funds must Clear My Bank Before Pickup, NO EXCEPTIONS!!!