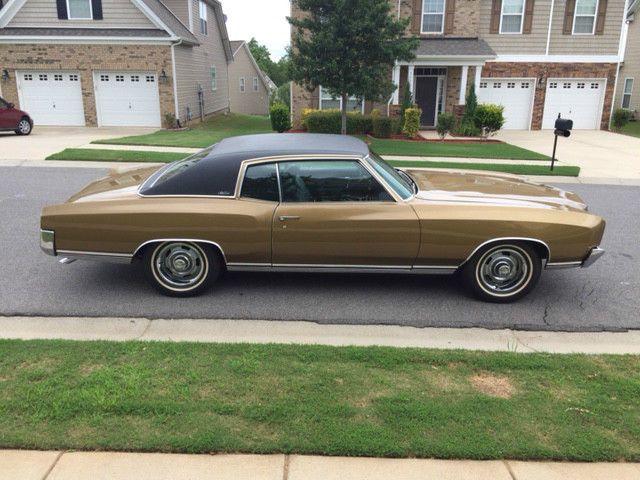 Rare first year 1970 Chevy Monte Carlo. It has gold paint with a black top. I am the 3rd owner
of the car. It was purchased by a lady that had it for many years before passing away. It was then purchased by a
friend of mine. I watched him use it as a daily driver and I couldn't let him abuse this beauty anymore so I bought
it and put it in the garage. It's got only roughly 77500 original miles. It's a 400 small block engine. I've
replaced all tires, the brakes, head gaskets, battery, wiring, struts, muffler, and starter that can remember (
since I don't drive the car very often the first start takes a minute). It had a transmission flush and some
general work done. I have replaced the speakers and put a CD player with 3.5 jack in the glove compartment. I've
replaced the front right light bezel and the rims. I have had some carbonator work done but it could use more. I
have replaced the dash and head board lamps and bezels along with the visors, knobs, headrests, and re-detailed the
dashboard. I've had the locks redone as well as started fixing the air condition but it still needs a new hose.
There is some minor rust residue in the wheel wells and some minor bubbling in a couple of places under the canvas
top. There are no tears or rips on the top canvas or in the interior. Car runs pretty good but I don't drive her
enough and hence looking for a good home. I keep her on a trickle charger most of the time. Cosmetic things that I replaced I made sure they fit a 1970 Monte Carlo. Interior is black with a wood grain dash. Car is a automatic. There isn't any
major body damage and to my knowledge all original. All in all a great example off this classic.