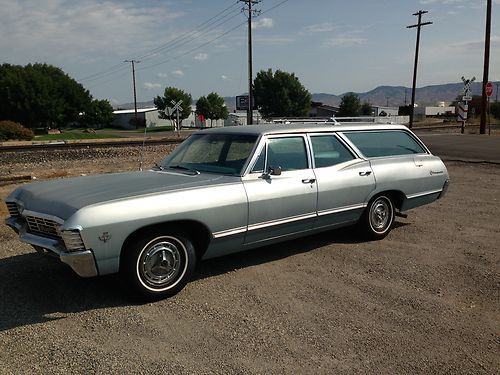 HERE IS A 1967 CHEVY IMPALA WAGON. IT IS A ONE OWNER DOCUMENTED 91K ORIGINAL MILES. HAS MATCHING NUMBERS 327 ENGINE, POWERGLIDE TRANSMISSION, AIR CONDITIONING(WORKS BUT NEEDS TO BE CHARGED), POWER BRAKES, POWER STEERING, POWER REAR WINDOW, DASH PAD, ELECTRIC WIPERS. EVERYTHING WORKS IN THIS CAR INCLUDING, LIGHTS, TURN SIGNALS, RADIO, CLOCK(WOW), AC, GAUGES, WIPERS, ECT. THE WAGON COMES WITH ALL THE ORIGINAL PAPER WORK. RUNS AND DRIVES GREAT. IT STILL HAS THE ORIGINAL PAINT, IT HAS NEVER BEEN REPAINTED. THE ONLY RUST I CAN SEE IS A LITTLE IN THE BOTTOM OF THE SPARE TIRE PANEL. EVERYTHING ELSE IS VERY SOLID AND RUST FREE...

I AM A IDAHO DEALER AND ANY IN STATE BUYER ARE SUBJECT TO TAX,TITLE,AND DOC FEES.