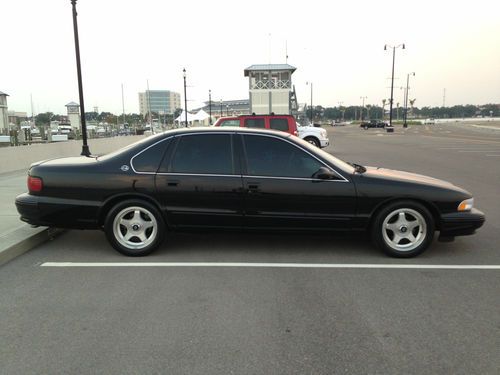 I'M SELLING MY LOW MILE IMPALA SS, THIS CAR HAS BEEN BABIED SINCE NEW, ROYAL PURPLE FULL SYNTHETIC OILS RAN SINCE IT WAS NEW. THIS CAR HAS BEEN WASHED WEEKLY AND WAXED MONTHLY EVEN IF IT WASNT DROVE MUCH. THE OIL HAS BEEN CHANGED DUE TO THE TIME OTHER THAN THE MILES IT HAS BEEN DRIVEN. THIS CAR IS WATER SPOT FREE AND HAS HAD THE TEFLON PROTECTANT APPLIED ON EXTERIOR WHICH MAKES THE WATER BEAD RIGHT OFF! THE TRUNK IS IN LIKE NEW SHAPE AND HAS ORIGINAL SPARE INTACT. THE INTERIOR STILL SMELLS NEW AND LEATHER IS WRINKLE FREE. THIS WAS MAINLY A ''DRIVER ONLY'' CAR. ALL ORIGINAL FLOOR MATS ARE INCLUDED AND ARE STAIN FREE. PICTURES DO NOT DO THIS CAR JUSTICE!

TEST DRIVES AND PRE SALE INSPECTION ARE WELCOMED AND ENCOURAGED! ANY QUESTIONS REGARDING THE SALE OR FOR SPECIFIC PICTURES DON'T HESITATE TO CALL OR TEXT!
228-806-9501