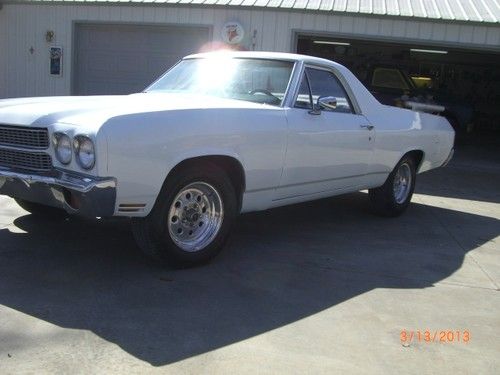 The floors, rockers and rear outer lower 1/4 are RUST FREE,
as the pics will show.
Did replace the tailgate skin, as it was to beat up and much easier to replace
than fill with mud. The bed was Rhino lined.
Fresh 350 with mild cam, fresh 350 trans.
All new exhaust with Flowmasters run all the way out the back.
New Disc brake conversion.
New battery
Fresh paint (single stage urethane)
New carpet,door panels, dash, seat  & weatherstrips
All electric and light work as it should.
Cragaer wheels with very good tires (80 - 90%)
This is not a 15 to 20 thousand show car, but a very nice reliable driver,
as the selling price will reflect
It's a 70, the most desierable of the 68 - 72 El Caminos.
Any further ?'s fell free to cantact me @ 580-786-2005
This vehicle is For Sale locally and may be ended for a local sale
It is sold AS/IS with no warrenty implied
Thanx 4 Lookin !