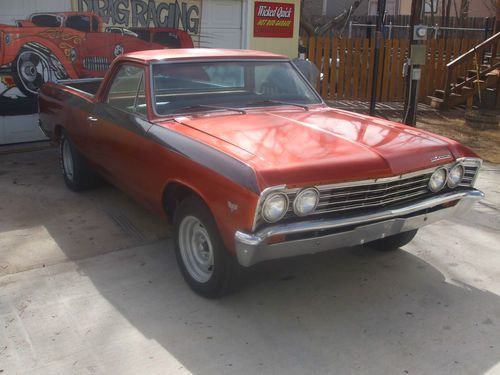 1967 EL CAMINO FOR SALE,I TOOK THIS CAR IN TRADE, ITS A NEW MEXICO CAR SO ITS SOLID, THE CAR RUNS AND DRIVES DECENT, I HAVE HAD IT AROUND THE BLOCK A FEW TIMES AND RUNS OK, THE BODY SEEMS TO BE IN GOOD SHAPE, SOLID FLOORS AND BED AREA, THE PAINT IS NOT THE GREATEST, THE INTERIOR IS NICE, SOMEONE HAS ADAPTED A LATE MODEL STEERING COLUNM IN THE CAR WITH TILT STEERING, NEW TIRES IN THE REAR, RALLIES ON ALL 4 CORNERS, GLASS IS GOOD. NEEDS DRIVER SIDE DOOR HINGES OR PINS, THE DOOR SAGS SOME, IT HAS A FINICKY 2 BBL. CARB, I WILL THROW IN A ALUMINUM INTAKE FOR YOUR 4BBL. HEADERS AFTERMARKET HEI, ITS A NICE START TO A NICE PROJECT..EMAIL WITH ANY QUESTIONS