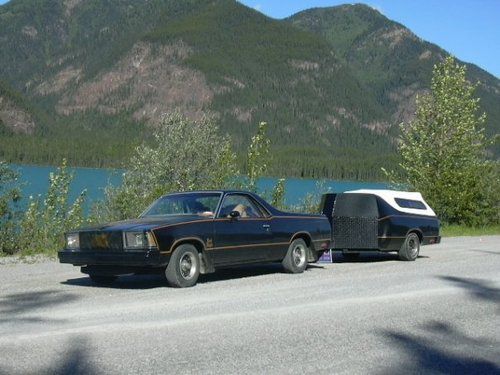 This is for the TRAILER only. I built this in 2007/2008 to match my 78 El Camino Black Knight. I pulled it from Alaska to Louisville, KY where I am came for school. I have completed school, therefore I am headed back to AK and don't have the desire or ability to get it back there easily. I have close to $5000 into it, but know I cannot get that for it. The bed is still unpainted or bedlined, I can finish that if you would like. The canopy comes with it, the tongue is extendable, the trailer lights are 5-flat with back up lights, the p-brake cables are ready for a lever to make them functional. There is a canopy style horizontal door on the front passenger side, with a swinging vertical door underneath it.

The frame of the front is made from 3/4 angle iron and 1/8 steel. The rear axle is factory with the vertical spider gears removed. It has fluid in the differential too. The shocks are new (2008) air shocks.
If you have any questions email rlowdermilk@hotmail.com or call/text 502-377-2320. I am leaving at the end of March 2013, so it will have to be shipped by then. I will help to set up shipping.