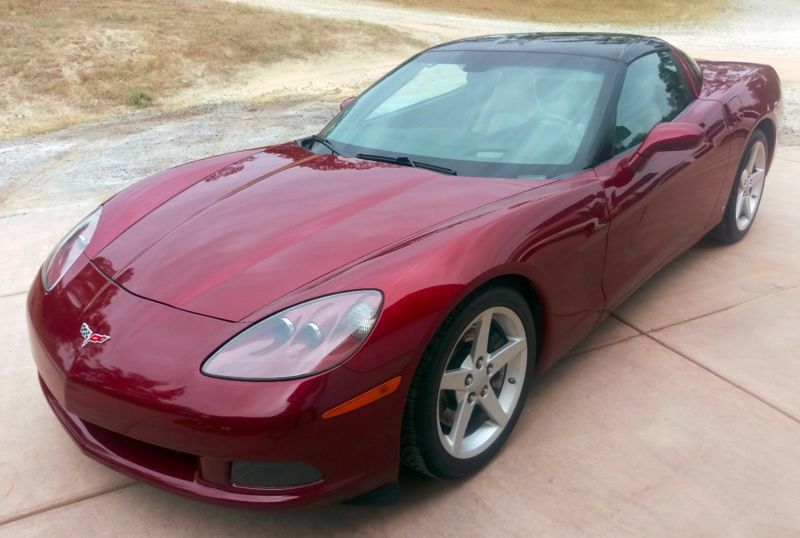 If you have any questions please email at: keriponzo@juno.com .

2007 Z51 3LT CORVETTE. MANUAL, HUD, NAV, TRANSPARENT ROOF 63.5K
Z51 3LT. Burgundy with Camel Leather interior.
I am the 2nd owner after a one year lease. I have had no mechanical issues with the car. It has been rock solid in
every way. The car has been and is amazing in my opinion. A total delight.
The Vette is respected. Always garaged or covered at my work. I do not drive in the rain, race, over-rev, stress or
abuse. I buy Lucas Oil gasoline additive by the gallon and I have added it into every tank 99.9% of the time. I
have performed two induction services, not because it needed it, but only because I am keeping the internal engine
pristine. Of course only Mobil 1 oil is used. I have rarely, maybe five times, used the air conditioner. It is ice
cold.
Washed weekly and detailed using only McGuire products and Aerospace 303. Waxed every quarter. I blow dry the car
after every hand wash. The paint has minimal swirls and is glossy. All crevices and the engine and interior are
wiped clean with a moist microfiber rag. The undercarriage and chassis is monitored at each wash and kept very
clean. The rubber is treated with silicon, the glass with alcohol. I weigh 160 lbs. The seats are firm and new
feeling. I do not smoke. I do not eat in the car. The upholstery is excellent and smells neutral or new.
The new Nitrogen filled Michelin Pilot Sport Run-Flat tires have 3K on them. The brakes are excellent. The engine
and drive train are excellent. The Battery is sealed top of the line. The rubber seals throughout the entire car
are soft and supple and excellent. The plastics are moist, shiny, preserved and protected because of the Aerospace
303. The Bose Premium Stereo is excellent. The Navigation with the stock disk and DVD player is excellent. Two
fobs, a car cover and cargo net are included.
Minor Blemishes include:
1. 1. On the hood there is a 2mm paint chip from a highway gravel which also made a similar 2mm nick on the
windshield.
2. 2. On the side top edge of the body, where the hatchback seam is located, there are some minor scratches to the
paint, as if the guy who leased it for a year let his golf bag drag across it as he was putting in into the luggage
hold.
3. 3. Car Fax Reports a minor incident that I was aware of when I purchased the car. I, myself, had it thoroughly
evaluated. I purchased the Vette, brought it home and had it fixed at my dealer. Damage Problem: The front nose
fiberglass was cracked. There was no other damage. The guy probably nosed to close to something. Solution: I had
the nose replaced at my dealer Michael Chevrolet of Fresno. I came by after work each day and witnessed each phase
of their replacement and paint matching. I requested no license plate holes.
3. 4. Corvette industries and all Dealerships will admit that the Transparent Roof will develop some micro fine
hairline striations over time. These micro fine hairline striations are unavoidable and almost undetectable. They
are inherent in the plastic.
These blemishes were there the day I purchased the car and were too minor for me to consider with such a beautiful
Vette as it is.
There are many specifications as you know, especially with the 3LT. And then there is the Z51 package to consider.
Please read up and ask if you need further clarification.
Just so you know: Dual 8 way power – heated seats, driver into/exit memory. Auto dimming rearview with compass.
Dual lighted vanity. Steering is telescopic/tilt. Navigation has a voice option. XM capable with hidden antennae in
driver side mirror. HUD and Digital displays for all fluids, gases, and G rated turns. Security Alarm.
Personal Notes: This is my second Vette. I have preserved this car since day one. The color combination is pure
class. The lines and symmetry of the body are beautiful. The engineering is exhilarating EVERY time you drive it.