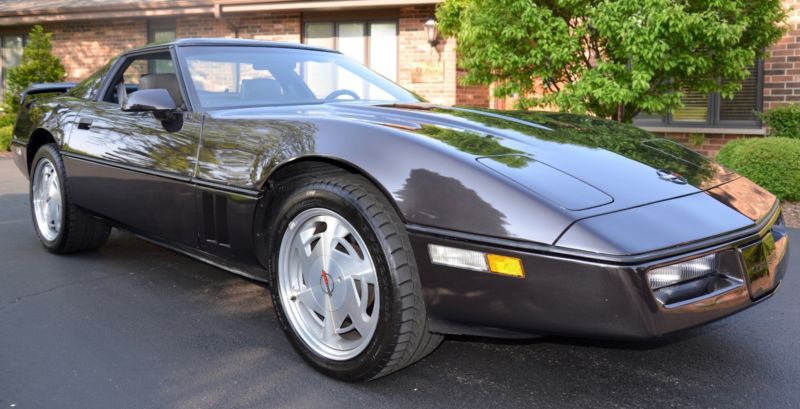 If you have questions email email me at: paigeplleverentz@uk8.net .

This is a collectors dream. It's basically a brand new 1989 C4 Corvette. I purchased it about 2 years ago from a
collector with just under 4,000 miles. It had been started and run regularly to keep the seals wet but I don't
believe its ever seen rain or snow. The passenger seat doesn't look like its ever been used. Even though the
milage was under 4,000 I had the tires and battery replaced because of their age at a cost of $900.00. (A photo of
the receipt is included). I also had the chevy dealer go through it, give it a thorough check up and change all the
fluids and hoses due to potential dry rot at a cost of just over $1000.00. I had the original radio, which was a
Delco-Bose cassette unit swapped out with an OEM AM/FM CD radio. The original radio is available if wanted. Since
the Bose speakers were not working properly , I had all the speakers sent to Bose to be refurbished. This service
was $1,200 and the receipt for this is also pictured in the listing. I have put just over $3000 in the car in the
past two years to ensure its in perfect working order and reliable. A photo of the original window sticker is in
the listing and included in the sale. I have 3 sets of keys, all the manuals and the glass top wrench with the car.
The car is charcoal metallic on the outside and light gray leather inside. The car is immaculate inside and out.
Its also immaculate underneath since its never been driving in inclement weather. It is optioned with the
following: * Tilt/telescoping steering wheel * Leather wrapped sport steering wheel * Electronic LCD instrument
panel * Dual electric remote heated outside mirrors * Power operated retractable halogen headlamps * Halogen fog
lamps * Remote rear hatch release * Bosch ABS II anti-lock braking system * Electronic speed control * Side window
defoggers * Rear window defogger * Power rack and pinion steering * Intermittent wipers * 5.7 Liter TPI V8 *
Automatic 4 speed transmission with OD * Engine oil cooler * Heavy Duty Radiator * Air Conditioning * Six way power
drivers seat * Glass roof panel/ Targa top * Power antenna * Aluminum wheels * Power door locks and windows * Spare
tire (a rare option for the C4) This car originally had a Greenwood ground effects package installed. I removed the
side skirts and front spoiler but left the rear wing. The front spoiler was damaged so I removed it and it's not
included with the sale. The side skirts are all included if you want them. There are a few holes drilled in the
lower area of the rear bumper that were required to install this package. Other that that, the car is immaculate
and runs beautifully. If I was going to be very critical of the cosmetics, there are a few small scuffs on the
front bumper that you can see in the close up shot in images. They are not deep and would be easy to fix. This is a
close to a new C4 as you are ever going to find. If you want to see additional photos or need any other info about
the car, don't hesitate to let me know. Thanks.