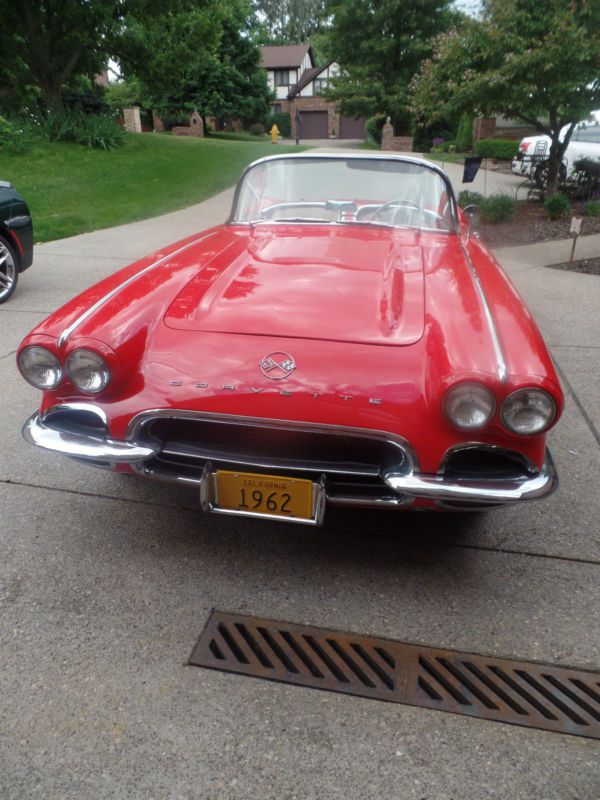 Just email me at: suellensrrozenberg@oneuk.com .

The mileage is 7332 since total restoration.. The car is equipped with the following standard features: electric
clock, dual exhaust, tachometer, heater & defroster, seat belts windshield washers.
In addition, this car has been outfitted with a custom tan interior, door panels, soft top, and trunk liner with
embroidered corvette logos on the seat backs, carpet mats and trunk lid liner. Also fitted with Vintage air
conditioning and larger aluminum radiator. Car is equipped with an alternator and chrome valve covers.
This is an early 1962 model built in August of 1962.The 327 CI 340 HP engine with 4 barrel carburetor were rebuilt
during restoration. According to the engine number, this is the original that came with the car. Number F0818RE
2100603.
The underside has been fully restored and painted black. The tires are Prime Well PS 850 size P205/75 R15 narrow
white walls. Wheel covers are original in excellent condition.
If I need to tell you about the desirability of the 1962 corvette you probably aren't looking at this add. This is
a beautiful car that is great to drive and shows very well. We are only selling this car since we are downsizing
and the new house doesn't have room for all our cars. Any questions feel free to ask.