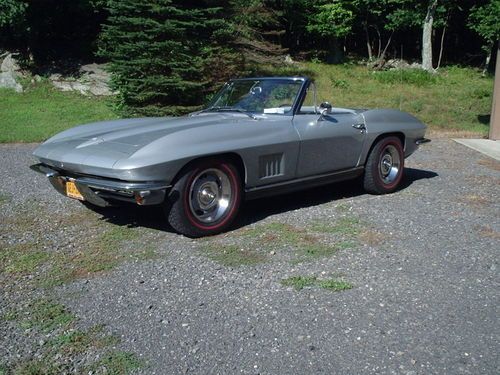 This is by far the nicest 67 I have ever owned and I have owned quite a few. This car was the recipient of a complete, professional, body off, ground up restoration that started with a very low mileage, no hit body and was completed in 2011. The car is original, numbers matching and came from the factory with its' two tops, 300 HP 327, 4-speed transmission, power steering, power brakes and 3.36 posi rear. The only exceptions to complete originality are the red line radials and the Custom Autosound stereo with a single CD player hidden in the glove box. This stereo is a plug and play unit which fits perfectly in the original location and was installed with no new holes drilled and no modification to the wiring at all. The CD player is installed in a similar fashion as are the rear speakers and a new glove box is included if removing the player is desired. Also included is the original AM-FM radio which works as well as any did in 67. Everything on this car was rebuilt or replaced as needed and the brakes are now stainless as is the common practice. This car starts, runs and drives like a brand new 67 Corvette and everything works as intended. There is a photo book included depicting the complete restoration along with paperwork. This corvette has won five Top Flight awards(included) and could do so again easily. No test pilots but rides cheerfully given weather permitting.