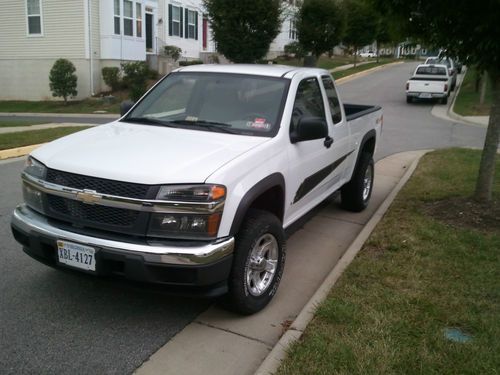 This is a clean truck most of its life it was in Vegas.  The undercarriage is just about rust free. The only upgrade that i did was changed the air filter to a k&n filter for better air flow and a cleanable filter. I had one issue with it and it was the trans, the automatic trans was rebuilt about 8000 miles ago that was done by Chevrolet dealer. The truck is 4x4 and no problems. The truck has 100xxx  original miles on it and all stock except after market tires and rims. Tires still have at least 90% tread on them. I have been changing the oil and every 4,000 miles with synthetic oil. There is tow hitch that comes with the truck and has the 4 prong wiring coupling. The engine is a 3.7 v5 gets about 16-19 city and 21-25 highway. I have just changed the rear drum brakes. I have new pads and rotors but the old pads are not worn out yet and the old rotors dont have enough wear. I can put the new pads and rotors on if you want me too or i can give them to you when u buy the truck. The rotors alone retail for 100 each.  The 4X4 works great but haven't used it much. Also if u buy this truck you will get the chiltons manual for fixing the truck yourself saves you a lot of money. If there are any more questions e-mail me.  Thanks for looking. I am sell this truck because i am upgrading to a bigger truck all offers considered. I reserve the right to cancel this sale for someone buying the truck through outside ebay.