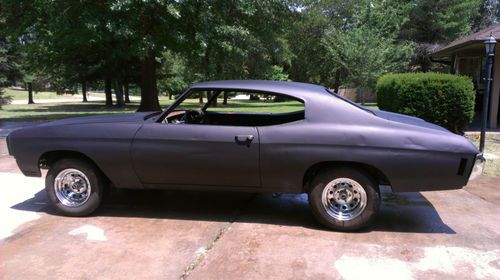 Condition: Used: A vehicle is considered used if it has been registered and issued a title. Used vehicles have had at least one previous owner. The condition of the exterior, interior and engine can vary depending on the vehicle's history. See the seller's listing for full details and description of any imperfections. ...
Welcome To My Auction!!
We were building 2 of these and have run out of money. The engine runs, the transmission is good.. I will start it for you and let you play with it. I have it wired and plumbed to run on a battery, gas can and a few gauges.We tore the engine down to a short block and checked it. I won't sell something I don't trust. When we had it apart, we installed a mild bump hi performance Crane came and lifters. I can't remember the spec but the engine sounds great and should be making a ton of power for a SBC. We built it thinking we were going to keep it.
The floor and trunk are nearly perfect. The bottom has been completely undercoated. I stripped the body to bare metal (except the bottom) and treated it with professional grade rust converter. Right now it has a bit of bondo and a lot of primer on it. It needs to meet a body guy. I can spray but I'm no body guy.
I have the inner fenders. They aren't in the picture because I painted them and they are drying. They will go in today or tomorrow.
Holley 750 carb professionally rebuilt
New starter, alternator, gaskets, headers, body bushings, upper control arm bushings.
We only use grade 8 bolts even though we didn't break a single bolt in the tear down. Like I said very little rust.
The frame was blasted and painted and all front end parts are good.
I have a clean Oklahoma title that is in my name and the tag is current.
10 bolt rear end with 3.42 gears.
It has good carpet, and a great rear seat. The door panels are rough though.
I have a clean Oklahoma title that is in my name and the tags is current.
Needs:
Brakes, wiring harness, drive shaft, gas tank, front seat, radiator (the one in it is a junker out of my yard), bumper, glass, and the small stuff.
You won't be disappointed in this car. The black primer shows every flaw. What you see is what it is!
I have a bunch of higher resolution pics I can send. Just let me know.
If you email me, I can send you a link to 115 more pictures.
Here is a video of the car and the engine running. The sound sucks but you get the idea.
Go to YouTube and search: Gentry Chevelle for sale
I can deliver for $1 a mile.
My name is Jason. Text is preferred but calls and emails are OK. 405-623-4269
It is listed locally so don't be surprised if it disappears.