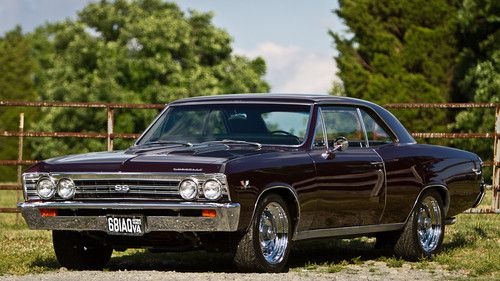 I am selling my Super Sport that I have been restoring for the last 13 years. It is a great driving car that was built in Baltimore in Feb, 1967. It has a 396/360 EU motor, Turbo 400 trans and a 12 bolt rear end with 3:31 gears. The engine and rear end was each built in late 1966 via the casting numbers, I can't verify the transmission because there is no tag. The engine and the rear end was gone thru about 3 years ago, the trans has been great. The car has Wilwood front disks and because the rear end is original it retains the drum setup. It has Chrome Wheel Vantique 15" rally wheels and NT550 tires. I have many documents supporting the work I have done and this write up doesn't do the car justice. My selling the car is hard but my responsibility to my family makes this decision a no brainer.

The only thing left to do is the trunk, fan system, broken bolt for driver door and show quality paint job. It was a drag car so the shut off switch hole is still in the rear panel and the battery was in the trunk. I removed the shut off switch and put the battery back in the engine compartment but the holes are still in the trunk. I changed the driver door lower hinge and broke a bolt off in the strike panel. The tires are flat spotted but you can't tell untill you get above 65-70. The fan system stays on so I pulled the fuse. This car has a decent paint job but if I was to put a show quality paint job on the car I wouldn't drive it. The odometer was disconnected and is now calibrated and working.

All my numbers checks out from the cowl tag to the VIN and even the rivets are correct for the 1967 SS396.

If there are any questions or correction please let me know.