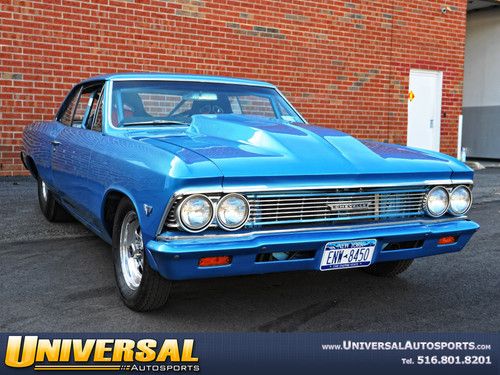 Up for auction is this super clean, super strong 1966 Chevelle.  This car was built from the ground up by 1320 race cars on long Island with chromoly, NHRA certified cage, narrowed 9 inch rear end and ladder bar suspension.  The interior aluminum is a piece of artwork, as well as the tig welded cage.  The car's body was completely stripped down to bare metal , and repainted inside, outside and underside in Marina Blue.  The interior is completely refinished with black, dash, carpets and headliner.  The seats are new racing buckets, with Simpson Belts.

The engine is a 572 cub in bowtie block, bored to a final cub inche of 580!  The heads are steel Merline rectangular ports, fully polished with all new 2.30/1.90 valves, guides, springs etc.  The cam is a custom roller kit from Bullet cams.  The bottom end is the best of the best...callies crank, oliver rods, JE pistons- 10.50:1.  A 1050 Dominator sits on top of the Merlin single plane intake manifold.  The hedders are custom pieces from Lemons, out to a full 4 inch custom exhaust.

The transmission is a custom Turbo 400 from Select Transmission in Long Island.  It is fitted with fully operation trans brake as well.

The car is the ultimate street/strip hot rod, that is turn key and ready to go.  Please feel free to call us with any further questions.  Thanks