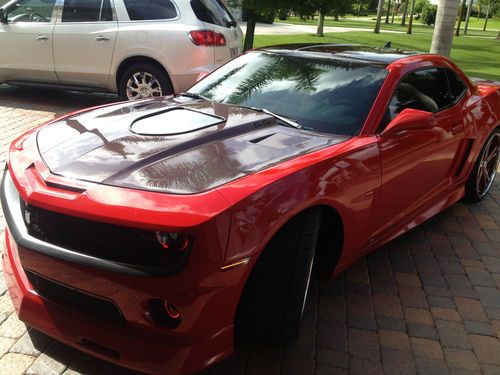 Condition: UsedA vehicle is considered used if it has been registered and issued a title. Used vehicles have had at least one previous owner. The condition of the exterior, interior and engine can vary depending on the vehicle's history. See the seller's listing for full details and description of any imperfections.Seller Notes:"NONE"

FULL ONE OFF BODY KIT

PLEASE CALL WITH ANY QUESTIONS

THIS IS A SERIOUS AUCTION PLEASE BID ACCORDINGLY.  WHICH MEANS HAVE THE FUNDS READY TO PURCHASE THE VEHICLE.  I CAN HELP FIND A SHIPPER OR YOU CAN FLY INTO WEST PALM BEACH AND I CAN PICK YOU UP AND YOU CAN DRIVE ANYWHERE.  INSPECTIONS ARE FULLY WELCOME. THIS CAR IS PERFECT AND ONE OF A KIND.

I have had a number of e-mails and calls, here is the answer to the main questions.

Wheels have absolutely NO curb rash, not a mark as new They are 3 Piece Asanti

Flawless. 3. The top is painted in a dark Candy Apple red, to match the Carbon Fiber Hood and Trunk.