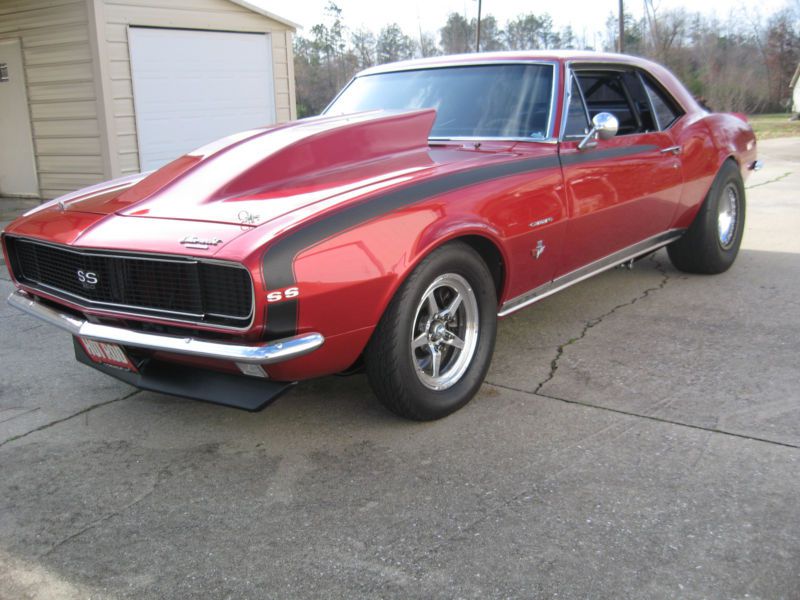 If you have any questions feel free to email: jaymejggardinier@ukswingers.net .

1967 RS/SS CAMARO.... THIS CAR IS NOT A CUT UP RACE CAR! IT IS CURRENTLY BUILT AS A 275 DRAG RADIAL CAR. YOU CAN DRIVE IT ON THE STREET ALL LIGHTS ,BLINKERS,BRAKE LIGHTS EVERYTHING WORKS AS IT SHOULD. THE BODY IS RUST FREE THE FLOOR PANS ARE IN GREAT SHAPE. THE QUARTERS AND FENDERS ARE LASER STRAIGHT ALL THE GLASS IS NICE THE BRIGHT WORK LOOKS GREAT. COMPLETE BARRY GRANT FUEL SYSTEM WITH 975 CFM RACE DEMON CARB. ALL STAINLESS BRAIDED LINES STARTING AT THE FUEL CELL -10 AN FITTINGS. PLUMBED FOR A NITROUS KIT. HAS A NEW ZEX 300 SHOT NOS SYSTEM. 20 GALLON FUEL CELL WITH FUEL CENDER .ALL AUTOMETER GAUGES. OIL PRESSURE, ENGINE TEMP.FUEL LEVEL,AMPS,TRANS TEMP,OIL TEMP, VACCUM, NITROUS PRESSURE GAUGES.
INTERIOR...THE DELUXE INTERIOR IS SUPER CLEAN AND IN GREAT SHAPE ITS GOT A CERTIFIED TIG WELDED ROLL CAGE. NICE HARNESS FOR DRIVER AND PASSENGER.