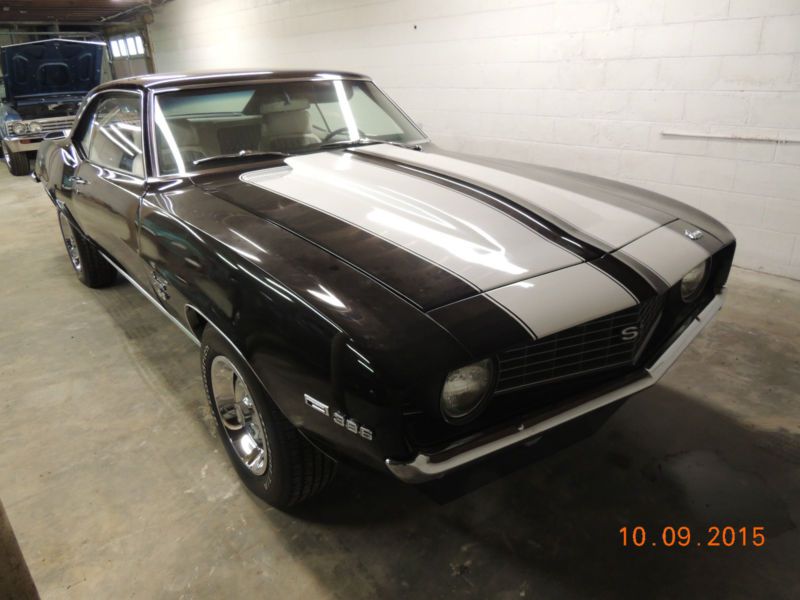 If you have any questions feel free to email me at: mackenziemkkahoohalphala@boyracer.net .

THIS 1969 CHEVROLET CAMARO SS HAS UNDERGONE A COMPLETE FRAME-OFF RESTORATION. IT IS A VERY NICE CAR FOR ANYONE TO
ENJOY WITHOUT SPENDING $50 OR 60 GRAND TO GET A CAR THAT LOOKS AND PERFORMS AS THIS ONE DOES. TO BE CLEAR, THIS IS
A BIG BLOCK BUT DOES NOT HAVE A NUMBER MATCHING MOTOR. THE CAR WAS A EARLY PRODUCTION WITH NO X CODE. THE CAR WAS
BUILT IN NORWOOD, OHIO. THIS CAR IS NICE INSIDE, OUT, AND UNDERNEATH. IT WAS FULLY RESTORED SUMMER OF 2012.
BASICALLY EVERYTHING ON THE CAR IS EITHER NEW OR REBUILT. THE PAINT COLOR IS TUXEDO BLACK WITH WHITE RACING STRIPES
AND BLACK AND WHITE HOUNDS TOOTH INTERIOR. THE COLOR COMBO IS STUNNING. THE CAR HAS A QUALITY PAINT JOB ON IT AND
IS STRAIGHT DOWN THE SIDES. THE DOOR GAPS AND FIT IS NICE. NO RUST ISSUES WITH THIS CAR. THIS CAR HAS NEW METAL
INCLUDING TRUNK PAN,OUTER SHEET METAL IS ALSO NEW. ALL CHROME AND TRIM IS ALL NEW. THE DRIVE TRAIN IS FRESH ALSO.
THE 454CI MOTOR BORED .30 OVER, I WAS TOLD IT HAS BEEN REBUILT AND HAS A SLIGHTLY OVERSIZE CAM FOR A GOOD LUMPY
IDLE. IT STARTS AND RUNS VERY NICE. THE CAR COMES WITH POWER STEERING, POWER DISC BRAKES AND A 4-SPEED TRANSMISSION
WHICH I'M GUESSING AROUND 3:55 GEARS MAKING IT VERY DRIVABLE. NEW BFG RAISED WHITE LETTER TIRES HAVE BEEN MOUNTED
ON RALLY WHEELS WITH NEW FLAT CAPS AND RINGS. EXHAUST IS NEW ALSO AND SOUNDS GREAT WITH FACTORY MANIFOLDS. LIKE
EVERYTHING ELSE, THE INTERIOR IS COMPLETELY NEW.IT HAS THE EVER-POPULAR WHITE AND BLACK HOUNDSTOOTH INTERIOR. DASH
PAD, DOOR PANELS,CARPET, HEADLINER,SUN VISORS, STEERING WHEEL, ETC,ETC EVERYTHING IS VERY NICE. THIS CAR IS CLEAN
EVERYWHERE YOU LOOK. I WOULD ENCOURAGE ANYONE WHO WANTS TO BUY THIS CAR TO COME AND INSPECT THIS CAR,YOU WILL NOT
BE DISAPPOINTED.