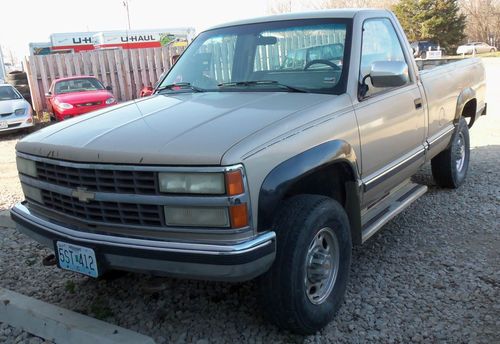 Condition: Used: A vehicle is considered used if it has been registered and issued a title. Used vehicles have had at least one previous owner. The condition of the exterior, interior and engine can vary depending on the vehicle's history. See the seller's listing for full details and description of any imperfections. ...
UP FOR GRABS IS A 1990 CHEVROLET SILVERADO 4X4
THIS HAS A RARE MANUAL 4 SPEED TRANSMISSION
THE DRIVERS SEAT EDGE HAS THE MATERIAL WORN OFF IT
THERE ARE MANUAL WINDOWS AND LOCKS
THE DRIVER AND PASSENGER CAB CORNERS HAVE RUST
HOOD HAS SOME SURFACE RUST ON THE FRONT
THE TRUCK STARTS RIGHT UP AND IS READY TO BE DRIVEN HOME
PLEASE ASK ANY QUESTIONS BEFORE PLACING BIDS
YOU CAN REACH US AT 816-430-5600 IF YOU PREFER TO TALK WITH SOMEONE ABOUT THE TRUCK
WINNER IS EXPECTED TO PUT A $500 DEPOSIT WITHIN 48 HOURS
REMAINING BALANCE IS DUE 7 DAYS AFTER AUCTION ENDS
IF YOU NEED MORE TIME FOR PICKING THE TRUCK UP JUST LET US KNOW AND WE CAN WORK WITH YOU
GOOD LUCK!!