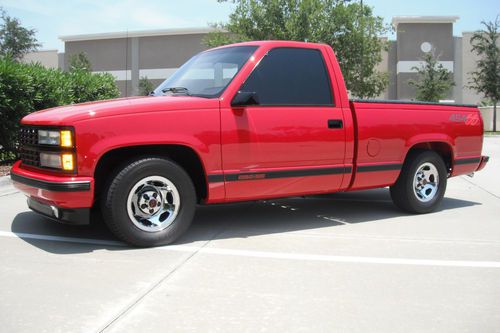 This is my 1992 454ss truck for sale. I bought it off the very 1st owner. It is all original except its lowered a little and has flowmasters on it. Its been garage kept since the day it was bought new. This truck is definetly show car quality inside outside and underneath. The underneath has no rust or rot what so ever, it still looks new.Never driven in snow at all, no dents or scratches. All mouldings are perfect, never towed a thing. It has 63,000 original miles on it and is all stock,untouched under the hood.THIS IS TRULEY A GARAGE QUEEN.  Red is the most rare color made for these trucks, thats why you never see them come up! EVERYTHING WORKS the way it should. Its all original paint, non smoker truck. The bed cover is not riveted into the body its installed on rails,the inside of the bed has had a bed cover on it since new also.  Please call me or email me with any questions you may have. The truck is for sale locally also so the auction could end anytime. call 908-310-6304-Dan  Or email strcdan@yahoo.com.  No text messages please